Plato on the Tragic Hero?

Similarly, the storyteller in Greene could be prescient when it came to exposing what his biographer calls "brittle orthodoxies." His characterization of America's involvement in Vietnam is a good example. Reasonable people can debate America's conduct of the war, but it is hard to argue with the narrator Thomas Fowler's assessment of the character of Alden Pyle in Greene’s novel The Quiet American (1955): "I never knew a man who had better motives for all the trouble he caused . . . impregnably armored by his good intentions and his ignorance." Anyone inclined to doubt this should dip into Max Hasting's recent history of the Vietnam War, or read Plato on the tragic hero, who must be neither rogue nor paragon but a "character between these two extremes . . . a man . . . whose misfortune is brought about not by vice or depravity, but by some error or frailty." 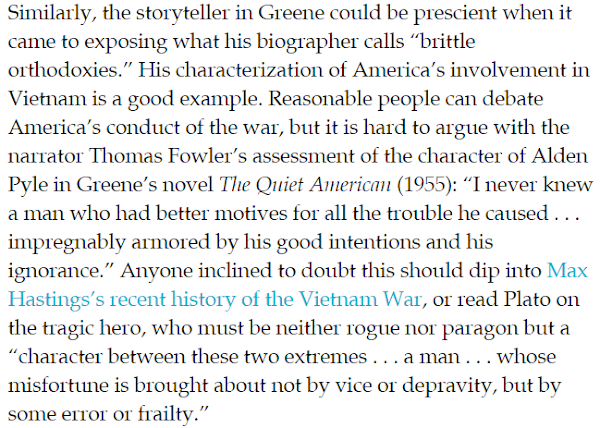