Apelles gave us a supper as if he had butchered a garden,
thinking he was feeding sheep and not friends.
There were radishes, chicory, fenugreek, lettuces, leeks, onions,
basil, mint, rue, and asparagus.
I was afraid that after all these things he would serve me with hay,
so when I had eaten some half-soaked lupins I went off.

He went among his garden roots
And took a knife and cut their throats;
Then served us greenstuff, heap on heap,
As though his guests were bleating sheep.
Rue, lettuce, onion, basil, leek,
Radishes, chicory, fenugreek,
Asparagus and peppermint,
And lupines boiled—he made no stint.
At last in fear I came away:
I thought the next course would be hay.

Thanks very much to Michael Hendry for sending me a photocopy of the relevant pages of Hendrich Schulte, Die Epigramme des Ammianos: Text, Übersetzung, Kommentar (Trier: Wissenschaftlicher Verlag Trier, 2004): 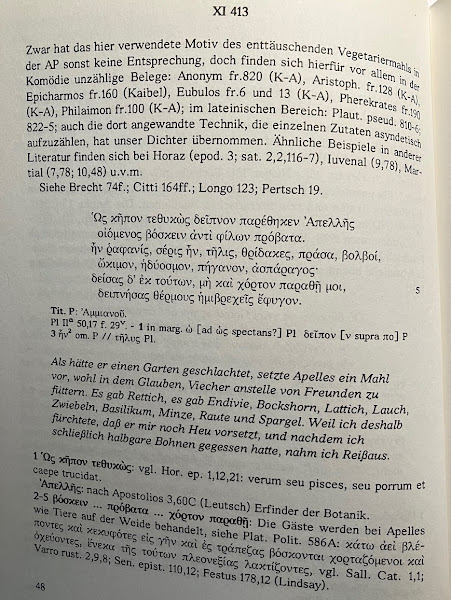 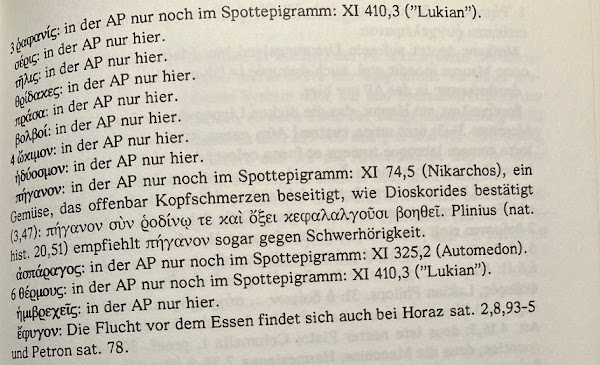