On my arrival, seated in the library I found Marcus Cato; I had not known he was there. He was surrounded by piles of books on Stoicism; for he possessed, as you are aware, a voracious appetite for reading, and could never have enough of it; indeed it was often his practice actually to brave the idle censure of the mob by reading in the senate-house itself, while waiting for the senate to assemble,—he did not steal any attention from public business. So it may well be believed that when I found him taking a complete holiday, with a vast supply of books at command, he had the air of indulging in a literary debauch, if the term may be applied to so honourable an occupation.

By the High Renaissance, art had come to pervade all aspects of life. From the arrangement of sweetmeats to the construction of fortifications — all were matters of moment upon which an artist's opinion might be needed or offered. And most of the great artists, too, regarded themselves as Jacks-of-all-trades. Leonardo did not think it beneath his dignity to design the costumes for the masques that his patrons loved or to fix the heating for a duchess' bath. And most of the great figures of the Renaissance displayed exceptional versatility. Michelangelo felt himself to be a man wholly dedicated to sculpture, yet after his reluctance had been overcome, he could paint the frescoes of the Sistine Chapel. And, of course, he could, and did, turn to architecture with equal facility and, when the mood was upon him, express his deepest feelings in poetry. The versatility of a Leonardo or a Michelangelo was far from unusual. Princes and patrons wished their lives to be embellished richly, ostentatiously, beautifully, and they were willing to pour out their ducats and florins on all the arts and crafts that adorn the life of man. They pursued physical beauty like a drug. Their heightened sensibilities, due to the sudden turns of chance that threaded their days with light and shadow, lusted for color, richness, wanton display. This aristocratic spirit at large in a world of bourgeois delights had no use for pewter dishes, sober costume, modest feasting, or chaste jewelry. It reveled in gold, in silver, in bronze, in gaudy dishes of majolica, and in silks, in satins, and in damasks, in cunningly wrought pearls, in sapphires, in rubies, and in emeralds. And the pageantry, the masquerades, the feasts, the dancing, and the music provided the background to this peacock world. This pride, this ostentation could find expression in the intellectual world as well as in the senses, and collections of antique bronzes, marble statues, splendidly illuminated manuscripts, beautifully bound books from the new presses, ancient rings and seals, became a prince as much as his palace or his pictures. The mania for collecting, as a reflection of social grandeur, emerges during the Renaissance. This delight in the eye, this desire to impress, created a constant demand for the services of the great masters, even for the most trivial and most ephemeral commissions — the molding of pastry, the decoration of a table, the casting of a candlestick, the cutting of an intaglio, the design of a dagger — almost all of which have disappeared into limbo. The works of a few craftsmen of genius — the terra-cottas of della Robbia, the metalwork of Cellini, the bronzes of Riccio — survive. Those of nameless craftsmen who achieved high excellence are more plentiful. Their ornate cassoni, their haunting bronzes, their brightly patterned majolicas, and, above all, their exquisite jewelry, scattered about the museums of America and Western Europe, give a glimpse of the sumptuous world for which they worked.

Come Unto Me, All Ye That Labour and Are Heavy Laden 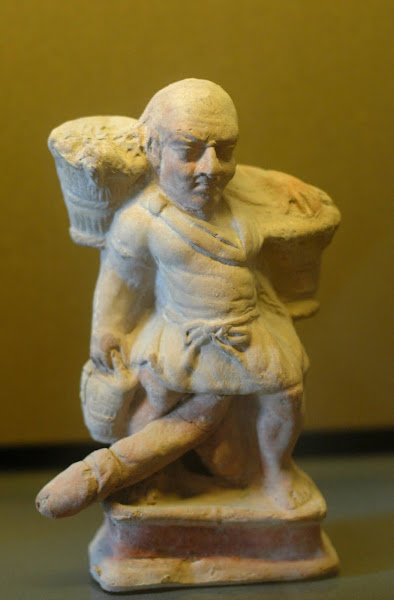 Any ancient satire is, by virtue of its name, its author's own black and putrid offering, stuffed for the table with an acrid and dubious blend of spices, giving a sour or salty kind of pleasure to its recipients.


Truth on Earth Instead of in Heaven

It is a sobering thought that the great Italian achievements in almost every sphere of intellectual and artistic activity took place in a world of violence and war. Cities were torn by feud and vendetta: Milan warred against Venice, Florence against Pisa, Rome against Florence, Naples against Milan. Alliances were forged only to be broken, the countryside was constantly scarred by pillage, rapine, and battle, and in this maelstrom, the old bonds of society were broken and new ones forged. After a brief period of peace, in the second half of the fifteenth century, the confusion and carnage grew worse through the great French invasions of Charles VIII, Louis XII, and Francis I, a time of agony that did not end till the dreadful sack of Rome in 1527 by the Holy Roman Emperor, Charles V. Yet this violence worked like yeast in the thought of men, and profoundly influenced the way they were to regard problems of power and government for hundreds of years. They ceased to look for answers to the fate of man in the dogmas of the Church. They searched the histories of antiquity for precedents that might guide them to the truth, but they also sought to explain, as Machiavelli did, the world in which they lived by what they knew to be the nature of man. Indeed, it was during the Renaissance in Italy that many men came to feel that truth was elusive, a mood afterward strengthened by the discovery of the world beyond Europe. The old dogmatic certainties did not vanish at once, and the habit of trying to nail truth down by argument from fundamental principles was not lightly cast aside. Some of the most original minds, however, particularly Machiavelli and Leonardo da Vinci, sought truth not in argument but in observation. Machiavelli brooded on men and events, on the effects of political action and on the consequence of chance; Leonardo grew preoccupied with the flow of water, the flight of birds, the formation of rocks. The growth of ideas and the development of mental attitudes are difficult to pinpoint in the course of history, but this, at least, can be said: the men of the Renaissance, by the range of their inquiries, by the freshness of their skepticism, and by the sharpness of their observation, gave impetus to, and helped to acquire intellectual acceptance for, the search for truth on earth instead of in heaven.


Hypocrisy of a Laudator Temporis Acti

You praise the fortune and manners of the men of old; and yet, if on a sudden some god were for taking you back to those days, you would refuse every time...

Aye, everything that's done is done for thee.
Thou art alone, thyself alone, the source
Of all our fortunes, good and bad alike.

What people believe prevails over the truth. 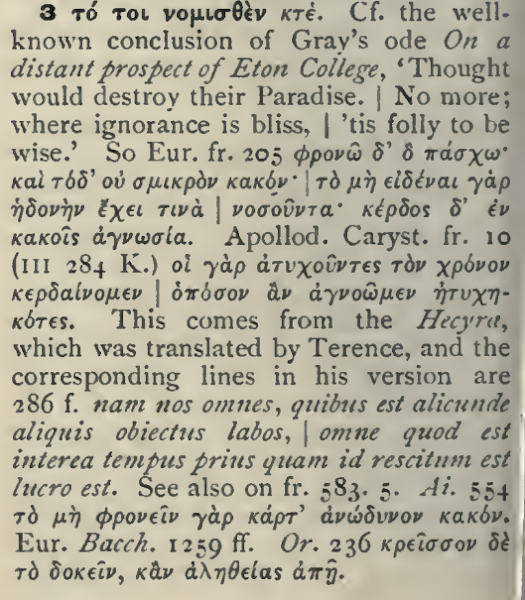 Up to now everyone has managed to find in the ancients what he needed or wished for: especially himself.

I do not know what I can say in reply to this, when good men are conquered by ignoble men. What city could put up with this?


Silence Has Many Beauties

Here's another piece of Pindar:

I will halt, for not every exact truth
is better for showing its face,
and silence is often the wisest thing for a man to observe.

and a shard each from Aesch., Eur. and Soph.:

For to many mortals silence is advantageous.

Silence is an ornament, a crown for a man without vice;
while chattering of this kind fastens upon pleasure,
and makes bad company, and is a weakness too for a city.

My son, be silent! Silence has many beauties.

From a friend's collection (click once or twice to enlarge): 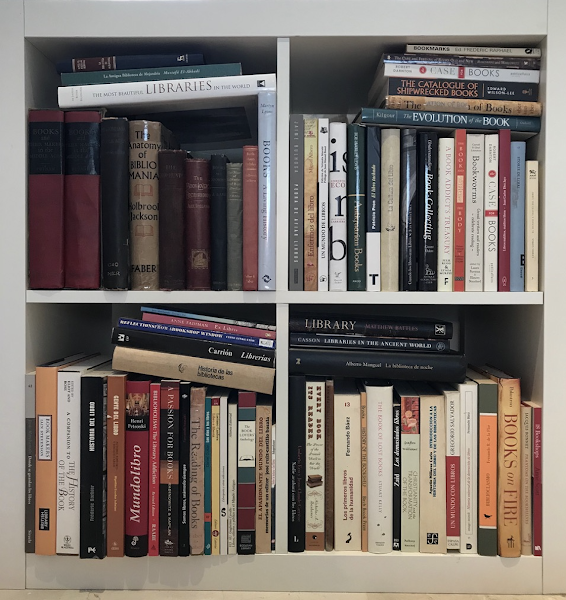 But for "on" meaning "on top of" see this photograph of another section of his flat: 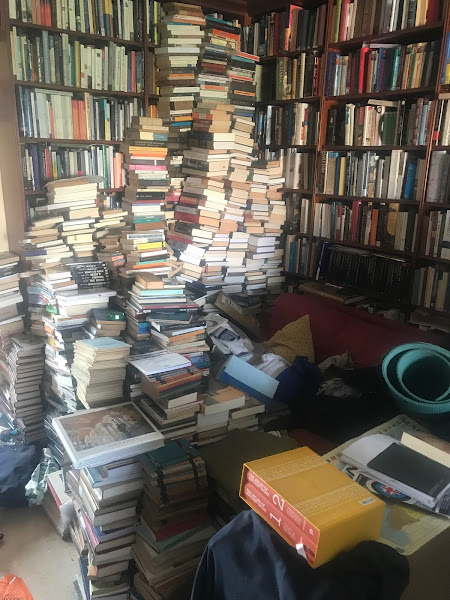 Love Ye Therefore the Stranger, For Ye Were Strangers

I do not forget my own upbringing in exile,
like yours, and how many times I battled, alone,
with dangers to my life, in foreign lands.
I could not turn from any fellow-man,
coming as you come, or deny him help,
I know that I am man; in the day to come
my portion will be as yours, no more, no less.


Gods of the Hills

Some slackness of ritual, we are told, that hurt the feelings of the dii montes, the gnomes of the hills, allowed Rome to fall to the barbarians.

The phrase dii montes, two nominative plural nouns in apposition, looks odd to me. Did Davenport mean to write dii montium, as in 1 Kings 20.23?

Their gods are gods of the hills. (KJV)

On the other hand cf. Lactantius, De mortibus persecutorum 11, which is ambiguous:

Another possibility, a little closer to Davenport's 'montes' (if it is his and not a kind of haplographic misprint), would be 'montenses', as in ILS 3051, discussed in Robert E.A. Palmer, "Jupiter Blaze, Gods of the Hills, and the Roman Topography of CIL VI 377," American Journal of Archaeology 80.1 (Winter, 1976) 43-56.


You Can't Stand to Be Alone with Yourself

And again, you cannot yourself bear to be in your own company, you cannot employ your leisure aright, you shun yourself, a runaway and vagabond, seeking now with wine, and now with sleep, to baffle Care. In vain: that black consort dogs and follows your flight.

The translation omits horam — for an hour.

Alone with themselves! — the idea of this makes modern souls quake, it is their kind of terror and fear of ghosts.

A Flood of Noise

Anything worth knowing passes from one person to another. The book is still a viable way of communicating, provided one has taught oneself to find the book one needs to read. It isn't easy. All the electronic media are a flood of noise.

How then do we define philology? Perhaps we can do no more than define it by paraphrase of its constituent parts, that by philology is meant the conducting of a φιλία (philia) relationship (that is, in a relationship of "affection," "respect," and "close proximity") to the λόγος (logos) (that is, the "word," or the "text"). The end or goal of this relationship may be seen as the following: philology believes, or philologists believe, that there are historical, objective truths about language and literature, and that, however great the obstacles, these truths may be reached, or at least approached, through a wide variety of methods.