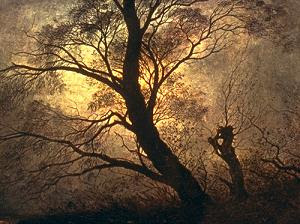 Caspar David Friedrich (1774–1840), Trees in the Moonlight
An early environmental villain is the figure of Erysichthon in Greek mythology. His crime was cutting down a tree in a grove sacred to the goddess Demeter, and his punishment was insatiable hunger. There are extended narratives of this myth in Callimachus and Ovid. I'll present the passage from Callimachus today, and the passage from Ovid another day.

Callimachus tells the story in his Hymn to Demeter. G. Karl Galinsky summarizes Callimachus' account in Ovid's Metamorphoses: An Introduction to the Basic Aspects (Berkeley: University of California Press, 1971), pp. 5-6:

Because he wants to build a house for himself, Erysichthon, the young son of Triopas, goes with twenty attendants to cut trees in the forest. They happen on a grove sacred to Demeter. The first tree they cut down there cries out aloud and Demeter, disguised as a priestess, asks Erysichthon to desist. He replies that he needs a house for banqueting, whereupon the goddess appears in her true form -- her step touching the earth, her head reaching unto Olympus -- and sends perpetual hunger upon him. In the subsequent and longer part of the narrative (lines 68-118), the poet focuses on the destructive effects of Erysichthon's affliction upon his family and their social status. The parents desperately want to maintain their respectability and try to conceal the true state of Erysichthon's condition by keeping him at home and devising ever new excuses for declining invitations. Meanwhile, the boy impoverishes them by eating up everything, even the family cat. Finally, with no edibles or money for edibles left at home, the parents' struggle is lost as Erysichthon has to go to the crossroads as a beggar and eat refuse.

Here is a translation of Callimachus, Hymn to Demeter 17-117 by A.W. Mair. I found a scanned version with errors on the World Wide Web. I fixed some of the obvious errors, but others may remain. I haven't yet had the chance to compare it with the printed version.

[17] Nay, nay, let us not speak of that which brought the tear to Deo! Better to tell how she gave cities pleasing ordinances; better to tell how she was the first to cut straw and holy sheaves of corn-ears and put in oxen to tread them, what time Triptolemus was taught the good craft; better to tell – a warning to men that they avoid transgression – how <she made the son of Triopas hateful and pitiful> to see.

[24] Not yet in the land of Cnidus, but still in holy Dotium dwelt the Pelasgians and unto thyself they made a fair grove abounding in trees; hardly would an arrow have passed through them. Therein was pine, and therein were mighty elms, and therein were pear-trees, and therein were fair sweet-apples; and from the ditches gushes up water as it were of amber. And the goddess loved the place to madness, even as Eleusis, as Triopum, as Enna.

[31] But when their favouring fortune became wroth with the Triopidae, then the worse counsel took hold of Erysichthon. He hastened with twenty attendants, all in their prime, all men-giants able to lift a whole city, arming them both with double axes and with hatchets, and they rushed shameless into the grove of Demeter. Now there was a poplar, a great tree reaching to the sky, and thereby the nymphs were wont to sport at noontide. This poplar was smitten first and cried a woeful cry to the others. Demeter marked that her holy tree was in pain, and she as angered and said: “Who cuts down my fair tree?” Straightway she likened her to Nicippe, whom the city had appointed to be her public priestess, and in her hand she grasped her fillets and her poppy, and from her shoulder hung her key. And she spake to soothe the wicked and shameless man and said: “My child, who cuttest down the trees which are dedicated to the gods, stay, my child, child of thy parents’ many prayers, cease and turn back thine attendants, lest the lady Demeter be angered, whose holy place thou makest desolate.”

[50] But with a look more fierce than that wherewith a lioness looks on the hunter on the hills of Tmarus – a lioness with new-born cubs, whose eye they say is of all most terrible – he said: “Hie back, lest I fix my great axe in thy flesh! These trees shall make my tight dwelling wherein evermore I shall hold pleasing banquets enough for my companions.” So spake the youth and Nemesis recorded his evil speech. And Demeter was angered beyond telling and put on her goddess shape. Her steps touched the earth, but her head reached unto Olympus. And they, half-dead when they beheld the lady goddess, rushed suddenly away, leaving the bronze axes in the trees. And she left the others alone – for they followed by constraint beneath their master’s hand – but she answered their angry king: “Yea, yea, build thy house, dog, dog, that thou art, wherein thou shalt hold festival; for frequent banquets shall be thine hereafter.” So much she said and devised evil things for Erysichthon.

[66] Straightway she sent on him a cruel and evil hunger – a burning hunger and a strong – and he was tormented by a grievous disease. Wretched man, as much as he ate, so much did he desire again. Twenty prepared the banquet for him, and twelve drew wine. For whatsoever things vex Demeter, vex also Dionysus; for Dionysus shares the anger of Demeter. His parents for shame sent him not to common feast or banquet, and all manner of excuse was devised. The sons of Ormenus came to bid him to the games of Itonian Athene. Then his mother refused the bidding: “He is not at home: for yesterday he is gone unto Crannon to demand a debt of a hundred oxen.” Polyxo came, mother of Actorion – for she was preparing a marriage for her child – inviting both Triopas and his son. But the lady, heavy-hearted, answered with tears: “Triopas will come, but Erysichthon a boar wounded on Pindus of fair glens and he hath lain abed for nine days.” Poor child-loving mother, what falsehood didst thou not tell? One was giving a feast: “Erysichthon is abroad.” One was bringing home a bride: “A quoit hath struck Erysichthon,” or “he hath had a fall from his car,” or “he is counting his flocks on Othrys.” Then he within the house, an all-day banqueter, ate all things beyond reckoning. But his evil belly leaped all the more as he ate, and all the eatables poured, in vain and thanklessly, as it were into the depths of the sea. And even as the snow upon Mimas, as a wax doll in the sun, yea, even more that these he wasted to the very sinews: only sinews and bones had the poor man left. His mother wept, and greatly groaned his two sisters, and the breast that suckled him and the ten handmaidens over and over.

[96] And Triopas himself laid hands on his grey hairs, calling on Poseidon, who heeded not, with such words as these: “False father, behold this the third generation of thy sons – if I am son of thee and of Canace, daughter of Aeolus, and this hapless child is mine. Would that he had been smitten by Apollo and that my hands had buried him! But now he sits an accursed glutton before mine eyes. Either do thou remove from him his cruel disease or take and feed him thyself; for my tables area already exhausted. Desolate are my folds and empty my byres of four-footed beasts; for already the cooks have said me “no.”

[107] But even the mules they loosed from the great wains and he ate the heifer that his mother was feeding for Hestia and the racing horse and the war charger, and the cat at which the little vermin trembled.

[111] So long as there were stores in the house of Triopas, only the chambers of the house were aware of the evil thing; but when his teeth dried up the rich house, then the king’s son sat at the crossways, begging for crusts and the cast out refuse of the feast. O Demeter, never may that man be my friend who is hateful to thee, nor ever may he share party-wall with me; ill neighbours I abhor.