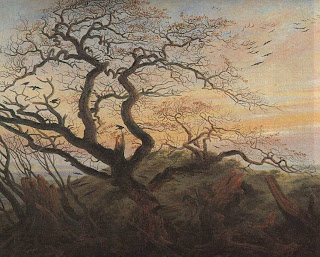 Caspar David Friedrich (1774–1840), The Tree of Crows
For comparison with Callimachus' narrative of the myth of Erysichthon, here is Ovid, Metamorphoses 8.738-842 (tr. Frank Justus Miller):

[738] No less power had the wife of Autolycus, Erysichthon's daughter. This Erysichthon was a man who scorned the gods and burnt no sacrifices on their altars. He, so the story goes, once violated the sacred grove of Ceres with the axe and profaned those ancient trees with steel. There stood among these a mighty oak with strength matured by centuries of growth, itself a grove. Round about it hung woollen fillets, votive tablets, and wreaths of flowers, witnesses of granted prayers. Often beneath this tree dryads held their festive dances, often with hand linked to hand in line they would encircle the great tree whose mighty girth was full fifteen ells. It towered as high above other trees as they were higher than the grass that grew beneath.

[751] Yet not for this did Triopas' son withhold his axe, as he bade his slaves cut down the sacred oak. But when he saw that they shrank back, the wretch snatched an axe from one of them and said: 'Though this be not only the tree that the goddess loves, but even the goddess herself, now shall its leafy top touch the ground.' He spoke; and while he poised his axe for the slanting stroke, the oak of Deo trembled and gave forth a groan; at the same time its leaves and its acorns grew pale, its long branches took on a pallid hue. But when that impious stroke cut into the trunk, blood came streaming forth from the severed bark, even as when a huge sacrificial bull has fallen at the altar, and from his smitten neck the blood pours forth.

[765] All were astonied, and one, bolder than the rest, tried to stop his wicked deed and stay his cruel axe. But the Thessalian looked at him and said: 'Take that to pay you for your pious thought!' and, turning the axe from the tree against the man, lopped off his head. Then, as he struck the oak blow after blow, from within the tree a voice was heard: 'I, a nymph most dear to Ceres, dwell within this wood, and I prophesy with my dying breath, and find my death's solace in it, that punishment is at hand for what you do.' But he accomplished his crime; and at length the tree, weakened by countless blows and drawn down by ropes, fell and with its weight laid low a wide stretch of woods around.

[777] All the dryad sisters were stupefied at their own and their forest's loss and, mourning, clad in black robes, they went to Ceres and prayed her to punish Erysichthon. The beautiful goddess consented, and with a nod of her head shook the fields heavy with ripening grain. She planned in her mind a punishment that might make men pity (but that no man could pity him for such deeds), to rack him with dreadful Famine. But, since the goddess herself could not go to her (for the fates do not permit Ceres and Famine to come together), she summoned one of the mountain deities, a rustic oread, and thus addressed her:

[788] 'There is a place on the farthest borders of icy Scythia, a gloomy and barren soil, a land without corn, without trees. Sluggish Cold dwells there, and Pallor, Fear, and gaunt Famine. So, bid Famine hide herself in the sinful stomach of that impious wretch. Let no abundance satisfy her, and let her overcome my utmost power to feed. And, that the vast journey may not daunt you, take my chariot and my winged dragons and guide them aloft.'

[796] And she gave the reins into her hands. The nymph, borne through the air in her borrowed chariot, came to Scythia, and on a bleak mountain-top which men call Caucasus, unyoked her dragon steeds. Seeking out Famine, she saw her in a stony field, plucking with nails and teeth at the scanty herbage. Her hair hung in matted locks, her eyes were sunken, her face ghastly pale; her lips were wan and foul, her throat rough with scurf; her skin was hard and dry so that the entrails could be seen through it; her skinny hip-bones bulged out beneath her hollow loins, and her belly was but a belly's place; her breast seemed to be hanging free and just to be held by the framework of her spine; her thinness made her joints seem large, her knees were swollen, and her ankles were great bulging lumps.

[809] When the nymph saw her in the distance (for she did not dare approach her), she delivered to her the goddess' commands. And, though she tarried but a little while, though she kept far from her and had but now arrived, still she seemed to feel the famine. Then, mounting high in air, she turned her course and drove the dragons back to Thessaly.

[814] Famine did the bidding of Ceres, although their tasks are ever opposite, and flew though the air on the wings of the wind to the appointed mansion. Straight she entered the chamber of the impious king, who was sunk in deep slumber (for it was night); there she wrapped her skinny arms about him and filled him with herself, breathing upon his throat and breast and lips; and so in his hollow veins she planted hunger. When her duty was done, she left the fertile world, and returned to the homes of want and her familiar caverns.

[823] Still gentle Sleep, hovering on peaceful wings, soothes Erysichthon. And in his sleep he dreams of feasting, champs his jaws on nothing, wearies tooth upon tooth, cheats his gullet with fancied food; for his banquet is nothing but empty air.

[828] But when he awakes, a wild craving for food lords it in his ravenous jaws and in his burning stomach. Straightway he calls for all that sea and land and air can furnish; with loaded tables before him, he complains still of hunger; in the midst of feasts seeks other feasts. What would be enough for whole cities, enough for a whole nation, is not enough for one. The more he sends down into his maw the more he wants.

[835] And as the ocean receives the streams from a whole land and is not filled with his waters, but swallows up the streams that come to it from afar; and as the all-devouring fire never refuses fuel, but burns countless logs, seeks ever more as more is given it, and is greedy by reason of the quantity; so do the lips of impious Erysichthon receive all those banquets, and ask for more. All food in him is but the cause of food, and ever does he become empty by eating.