Talk about the cusp of a trend: the term "bio-cleanup" does not appear in the Oxford English Dictionary or Wikipedia, and yet it has been at the tip of administrators' and custodians' tongues since the beginning of the school year.

Bio-cleanup at Williams College is not the same as bioremediation, which Wikipedia defines as "any process that uses microorganisms, fungi, green plants or their enzymes to return the environment altered by contaminants to its original condition." I've recently been reading about bioremediation in Paul Stamets, Mycelium Running (Berkeley: Ten Speed Press, 2005), chapter 7 (Mycoremediation).

No, bio-cleanup at Williams College means something quite different, as Korman explains:

The term refers to any custodial cleanup of vomit, urine or fecal matter on College property, particularly in common or residential areas. As of Sunday, an unprecedented 24 bio-cleanups have been performed on campus, a trend many find disconcerting.

According to the new policy, any student who admits to creating and leaving a biohazard – urine, vomit or excrement outside a toilet – is responsible for cleaning it up using a special cleaning kit provided by Facilities. A refusal to do so will result in disciplinary action, including possible suspension.

If no one comes forward after an incident takes place at a party hosted by a student organization, the organization is expected to clean up using the kit and will be fined and barred from hosting events for a minimum of one month if they do not comply. If neither culprit nor event organizer is identifiable, responsibility falls on the residences. If residents do not clean up, they are billed for cleanup; and the residence is placed on residents-only card access and denied registered parties for a minimum of one month.

The policy is the result of many weeks of discussion between the Dean's Office, Campus Life and Facilities, in consultation with Neighborhood Governance Boards (NGB), faculty and other schools in the region.

If the college authorities had consulted with me, I would have suggested the revival of a more ancient, fitting punishment — the cucking-stool, defined by the Oxford English Dictionary (OED) as

An instrument of punishment formerly in use for scolds, disorderly women, fraudulent tradespeople, etc., consisting of a chair (sometimes in the form of a close-stool), in which the offender was fastened and exposed to the jeers of the bystanders, or conveyed to a pond or river and ducked.

The OED gives the following etymology of cucking-stool:

Here is the OED definition of CUCK, v.1:

And here is one of the OED's definitions of STOOL (5.a):

A seat enclosing a chamber utensil; a commode; more explicitly stool of ease. Also, a privy.

For groom of the stool (stole), see STOLE n.2

John Webster Spargo, Juridical Folklore in England: Illustrated by the Cucking Stool (Durham: Duke University Press, 1944), argues that there is no connection between cucking-stool and cuck, but the etymology is defended by Lynda E. Boose, "Scolding Brides and Bridling Scolds: Taming the Woman's Unruly Member," Shakespeare Quarterly 42.2 (Summer, 1991) 179-213 (at n. 14, pp. 185-186):

His argument is ultimately unpersuasive and seems ultimately to depend on no more than his own determination not to believe that this could have been possible. It seems to me, however, quite logical to believe that cucking-stool punishments would have included the additional humiliation of enthroning a woman on a privy stool before riding her through town and ducking her.

Boose, p. 187, reproduces illustrations of cucking-stools from T.N. Brushfield, "On Obsolete Punishments, With Particular Reference to Those of Chesire," Chester Archaeological and Historic Society Journal 2 (1855-1862) 31-48 and 203-234: 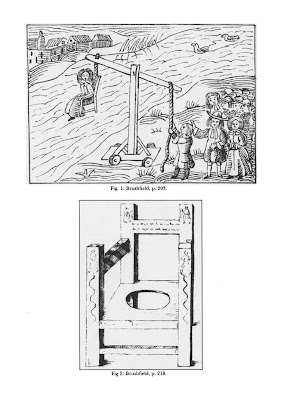 The use of the cucking-stool as a punishment might involve not only public humiliation and disgrace, but also ducking the offender in water. For this purpose, the Hoosic River might be handy. It flows past Williamstown, Massachusetts, the site of Williams College. But before inflicting this part of the punishment on the incontinent students of Williams College, we should probably await the opinion of Michael Mukasey, candidate for Attorney General of the United States, as to whether water boarding is torture.