George Eliot, The Mill on the Floss, Book II, chapter 2:

Fine old Christmas, with the snowy hair and ruddy face, had done his duty that year in the noblest fashion, and had set off his rich gifts of warmth and color with all the heightening contrast of frost and snow.

Snow lay on the croft and river-bank in undulations softer than the limbs of infancy; it lay with the neatliest finished border on every sloping roof, making the dark-red gables stand out with a new depth of color; it weighed heavily on the laurels and fir-trees, till it fell from them with a shuddering sound; it clothed the rough turnip-field with whiteness, and made the sheep look like dark blotches; the gates were all blocked up with the sloping drifts, and here and there a disregarded four-footed beast stood as if petrified "in unrecumbent sadness"; there was no gleam, no shadow, for the heavens, too, were one still, pale cloud; no sound or motion in anything but the dark river that flowed and moaned like an unresting sorrow.

But old Christmas smiled as he laid this cruel-seeming spell on the outdoor world, for he meant to light up home with new brightness, to deepen all the richness of indoor color, and give a keener edge of delight to the warm fragrance of food; he meant to prepare a sweet imprisonment that would strengthen the primitive fellowship of kindred, and make the sunshine of familiar human faces as welcome as the hidden day-star. His kindness fell but hardly on the homeless,—fell but hardly on the homes where the hearth was not very warm, and where the food had little fragrance; where the human faces had had no sunshine in them, but rather the leaden, blank-eyed gaze of unexpectant want.

But the fine old season meant well; and if he has not learned the secret how to bless men impartially, it is because his father Time, with ever-unrelenting unrelenting purpose, still hides that secret in his own mighty, slow-beating heart.

Eliot says that the snow "clothed the rough turnip-field with whiteness, and made the sheep look like dark blotches." A good illustration of this detail might be Snow Covered Fields with Sheep by Joseph Farquharson (1846-1935): 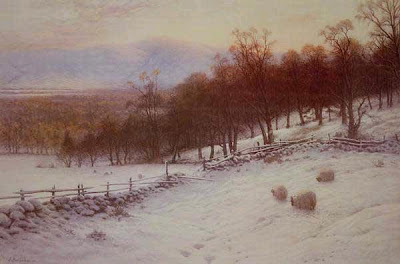 Farquharson painted so many similar scenes that he was called "Frozen Mutton Farquharson."