The U.S. Figure Skating Championships took place here in St. Paul last week. It requires a special lexicon to keep track of all the fancy skating terminology — Axels, Choctaws, Lutzes, Mohawks, Salchows, Twizzles, etc. Here is a description of some old-fashioned moves, from what one might call the Transcendentalist school of ice skating:

One afternoon, Mr. Emerson and Mr. Thoreau went with him [Hawthorne] down the river. Henry Thoreau is an experienced skater, and was figuring dithyrambic dances and Bacchic leaps on the ice—very remarkable, but ugly, methought. Next him followed Mr. Hawthorne, who, wrapped in his cloak, moved like a self-impelled Greek statue, stately and grave. Mr. Emerson closed the line, evidently too weary to hold himself erect, pitching headforemost, half lying on the air.

The skating championship got me thinking about the spot where I used to skate as a child in Brewer, Maine. Puck's Muck, we called it. The older children sometimes built a fire nearby, a welcome way to warm frigid hands and feet after a few turns on the ice. I googled Puck's Muck and was sorry to find the following in an article by Nok-Noi Ricker, "Neighbors Oppose Proposed Business Park," Bangor Daily News (Dec. 20, 2007):

The residents along Parkway North just don't want things to change in their backyards, but a developer who has purchased about 11 acres of abutting land is moving forward with plans to build a five-unit business park.

Brewer lawyer Donald Brown and his wife, Terri, purchased the land, which is located just south of Parkway North and is known locally as "Puck's Muck."

The American landscape artist Louis Rémy Mignot (1831-1870) studied in Holland under Andreas Schelfhout. To the Charleston, South Carolina native, ice skating must have been a novelty. Mignot painted this Winter Scene in Holland when he was a student: 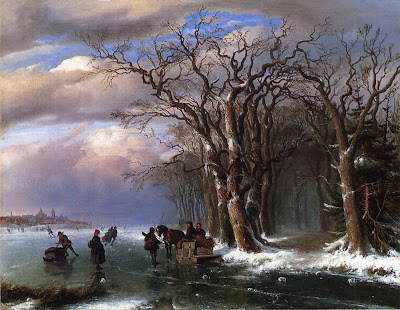