A Transfusion of Courage

Pines have earned the reputation of being ‘evergreen’ by the same device that governments use to achieve the appearance of perpetuity: overlapping terms of office. By taking on new needles on the new growth of each year, and discarding old needles at longer intervals, they have led the casual onlooker to believe that needles remain forever green.

Each species of pine has its own constitution, which prescribes a term of office for needles appropriate for its way of life. Thus the white pine retains its needles for a year and a half; the red and the jackpines for two years and a half. Incoming needles take office each June and outgoing needles write their farewell addresses in October. All write the same thing, in the same tawny yellow ink, which by November turns brown. Then the needles fall, and are filed in the duff to enrich the wisdom of the stand. It is this accumulated wisdom that hushes the footsteps of whoever walks under pines.

It is in midwinter that I sometimes glean from my pines something more important than woodlot politics, and the news of the wind and weather. This is especially likely to happen on some gloomy evening when the snow has buried all irrelevant detail, and the hush of elemental sadness lies heavy upon every living thing. Nevertheless, my pines, each with his burden of snow, are standing ramrod-straight, rank upon rank, and in the dusk beyond I sense the presence of hundreds more. At such times I feel a curious transfusion of courage. 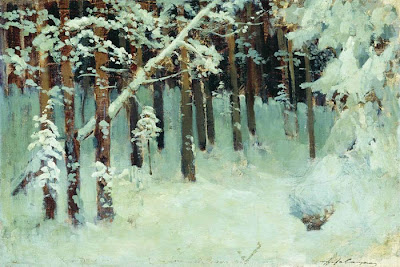