I am not a lover of lawns; on the contrary, I regard them, next to gardens, as the least interesting adjuncts of the country-house. Grass, albeit the commonest, is yet one of the most beautiful things in Nature when allowed to grow as Nature intended, or when not too carefully trimmed and brushed. Rather would I see daisies in their thousands, ground ivy, hawkweed, and even the hated plantain with tall stems, and dandelions with splendid flowers and fairy down, than the too-well-tended lawn grass. This may be regarded as the mental attitude of the wild man from the woods, but something may be said for it. 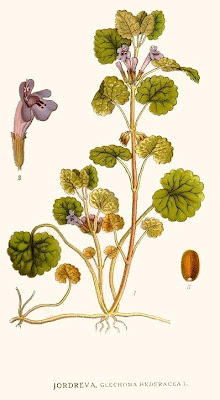 The scientific name for Creeping Charlie or ground ivy is Glechoma hederacea. The second half of the binomial, hederacea, is easy enough — it's an adjective formed from hedera, or ivy, which ancient poets were so fond of crowning themselves with. But Glechoma threw me for a loop.

The origin of the word "Glechoma" is not clearly explained. Possibly it comes from medieval Latin and Greek ("glēchōn," Attic "blēchōn", Ionic "glēchō" and Doric "glachō"). These foreign words of unknown origin signify the ancient pennyroyal.

Here is the entry in Liddell & Scott for the Greek word which is supposed to be the origin of Glechoma:

It is important to remember that all of the ancient citations refer to pennyroyal, not to ground ivy. According to Bäumler, loc. cit., ground ivy was unknown to the ancient Greeks and Romans. So I'm puzzled by Wikipedia's statement about ground ivy that "Its medicinal properties have been described for millennia, Galen recommending the plant to treat inflammation of the eyes, for instance." If Galen knew ground ivy, what did he call it? I'm not aware of any ancient Greek word for ground ivy.

If gill-over-the-ground, commonly miscalled ground ivy, were not so plentiful, and hence so much of a weed, it would rate as a choice ground cover with a modest but beautiful display of small violet-blue flowers. It is in full bloom now, growing almost everywhere, along stone walls, in damp shade on the lawn, invading garden borders. A creeper, it trails across the ground like true ivy, but it is actually a mint, one of the many mints that grow wild here but are native to Europe. Its small, scalloped, heart-shaped leaves have the mint tang and its flowers follow the mint pattern.

Gill's blossoms are tiny, seldom more than half an inch long, but they grow in clusters and make a warm display, particularly in Spring. Here they bloom well into Summer, but in England the gill is an April flower, the English equivalent, in a way, of our trailing arbutus. Those who brought it here wanted to remember April in England, and they had no notion that their gill would run away as it did, leap their garden walls and take to the fields. But that's what happened. And now gill is one of the wildlings, a fugitive trying tirelessly to get back into the garden. A prodigal, perhaps, but an independent prodigal, and a prosperous one.

Perhaps becase of the unusual warmth of early May, the little creeping mint called ground ivy or gill-over-the-ground is thriving and loaded with blossoms. The flowers are very small, typical mint flowers less than a quarter of an inch across, and light purple in color. They seem to have no fragrance. But apparently they are full of nectar and pollen, for they are favorite early flowers of the bumblebees.

The gill, as we always call it, is an insistent creeper and this year practically carpets the edges of the garden and makes big patches at the roadside, patches with a warm purple overtone from the multitude of bloom. If it were not so insistent in its weediness, it might be a welcome ground cover, for it lies flat, thrives in the heat of summer, and does very well even in the shade. It is not a native, actually, for the early settlers brought it from England where it once was the early spring equivalent of our trailing arbutus.

I like the gill, which is a beautiful little flowering plant; but just now I am sure it is important to every farmer who grows clover. As I said, the gill's blossoms are host to early bumblebees. When I watch a patch of gill I always see several of the big black and gold bumblers harvesting there. I watched for ten minutes the other afternoon and every bumblebee in sight passed up all the other early flowers, both wild and tame, to reach the gill. They were all big bees, undoubtedly queens who are nesting at this stage and will soon produce their little colonies. Bumblebees are the prime pollinators of clover. Without them, the clover seed crop would be a failure. So the humble little gill, by feeding the nesting queens, helps produce the bumblebees that keep the clover going.