I can't find the source of Benjamin's Jowett's definition of a scholar, mentioned by Hugh Lloyd-Jones, Blood for the Ghosts: Classical Influences in the Nineteenth and Twentieth Centuries (1982; rpt. Baltimore: The Johns Hopkins University Press, 1983), p. 158:

Jowett defined a scholar as a man who read Thucydides with his feet on the mantlepiece; by that test he was a scholar, scarcely by any other.

There is a similar definition in G.O. Trevelyan's Life and Letters of Lord Macaulay:

He defined a scholar as one who reads Plato with his feet on the fender.

Or one who reads Herodotus and Aeschylus before breakfast (Macaulay, Letter to Thomas Flower Ellis, Dec. 16, 1834):

I read much, and particularly Greek; and I find that I am, in all essentials, still not a bad scholar. I could, I think, with a year's hard study, qualify myself to fight a good battle for a Craven's scholarship. I read, however, not as I read at College, but like a man of the world. If I do not know a word, I pass it by unless it is important to the sense. If I find, as I have of late often found, a passage which refuses to give up its meaning at the second reading, I let it alone. I have read during the last fortnight, before breakfast, three books of Herodotus, and four plays of Aeschylus. 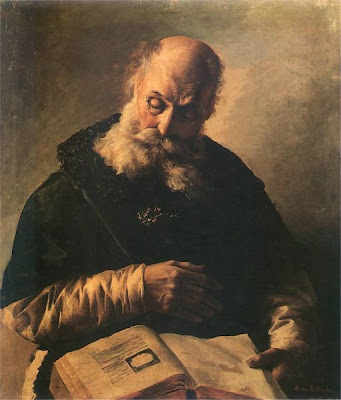