Simon Goldhill, Who Needs Greek?: Contests in the Cultural History of Hellenism (Cambridge: Cambridge University Press, 2002), p. 31, relates an interesting episode from the annals of bumf, in the context of the controversy between Erasmus and Edward Lee provoked by the latter's book Annotationes ad Annotationes Erasmi = Annotations on the Annotations of Erasmus:

Perhaps the most extraordinary episode, however, concerns the display of Lee's book in a Minorite library. Three days after it went on display, users of the library complained of a foul smell. It was traced to Lee's book which was found to have been smeared by someone with human shit. Erasmus — one of those to recall the story not without pleasure some years later — is still quick to add that he doesn't know who did it. Erasmus' lack of regret at such theological guerilla tactics is matched by the anonymous composers of two poems which offer epigrammatic encomia to the man who smeared shit on the pages of Lee (as Nesen writes delightedly to Lupset, sending him the poems60). The classical paradigm here — always necessary — is Catullus' famous invective of a rival's historical prose as 'cacata carta', 'pages for wiping shit.'61 Thomas More, a few years on, less than saintly: 'Luther has nothing in his mouth but privies, filth and dung...Mad friarlet and privy-minded rascal with his ragings and ravings, with his filth and dung, shitting and beshitted.'62 One reader of Lee seems to have literalized this language of abuse in a gesture of theological disgust — to the pleasure of the supporters of Erasmus.

60 Nesen in Epistolae aliquot eruditorum... (Antwerp: Hillen 1520); Rummel (1989) 113 says that Nesen 'quotes an epigram'; I have been unable to trace such a quotation in Nesen's letters, unless his comment that 'all that remains is to find another temple to keep the volume in, where it can be preserved with a liquid a long way from cedar-sap' is taken as the content of the epigrams. (Books were preserved with what is called succum cedri.) Nesen tells the story with the qualification that the Minorites themselves are beyond reproach, but with great pleasure in the details; see the recollection of Erasmus EE 8:92-3 [ep. 2126] March 1529, to Valdes.

Goldhill was unable to trace the poems and says they were anonymous. I found them in Epistolae aliquot eruditorum virorum, ex quibus perspicuum quanta sit Eduardi Lei virulentia (Basel: Froben, 1520), at the end of a letter from Wilhelm Nesen to Thomas Lupset. In the letter, Nesen says, "Conrad Goclenius of Westphalia, a gentleman of the most exact judgment and one who is busily occupied in Greek and Latin, composed two witty epigrams on this subject, which I now send to you." ("Edidit super hac re duo epigrammata non illepida Conradus Goclenius Vuestphalus, vir iudicii exactissimi et in utraque lingua gnaviter versatus, quae nunc ad te mitto.") 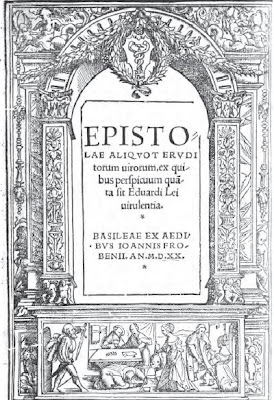 The use of paper for toilet purposes must have been practised no later than the +6th century. Although Chinese sources are generally silent about the use of paper for cleaning the body after elimination, one reference dated as early as the +6th century refers to the prohibition of paper with characters being used for such purposes. Indeed, the noted scholar-official Yen Chih-Thui (+531-91) said in his family instructions, written about +589, 'Paper on which there are quotations or commentaries from Five Classics or the names of sages, I dare not use for toilet purposes', and an early Arab traveller to China, who was obliged by his religion to perform purifying ablutions, commented curiously upon this use of paper. In his report of +851, he says: 'They (the Chinese) are not careful about cleanliness, and they do not wash themselves with water when they have done their necessities; but they only wipe themselves with paper.'