An Ocean of Green

For at the dawn of history Europe was covered with immense primaeval forests, in which the scattered clearings must have appeared like islets in an ocean of green. Down to the first century before our era the Hercynian forest stretched eastward from the Rhine for a distance at once vast and unknown; Germans whom Caesar questioned had travelled for two months through it without reaching the end. Four centuries later it was visited by the Emperor Julian, and the solitude, the gloom, the silence of the forest appear to have made a deep impression on his sensitive nature. He declared that he knew nothing like it in the Roman empire. In our own country the wealds of Kent, Surrey, and Sussex are remnants of the great forest of Anderida, which once clothed the whole of the south-eastern portion of the island. Westward it seems to have stretched till it joined another forest that extended from Hampshire to Devon. In the reign of Henry II. the citizens of London still hunted the wild bull and the boar in the woods of Hampstead. Even under the later Plantagenets the royal forests were sixty-eight in number. In the forest of Arden it was said that down to modern times a squirrel might leap from tree to tree for nearly the whole length of Warwickshire. The excavation of ancient pile-villages in the valley of the Po has shown that long before the rise and probably the foundation of Rome the north of Italy was covered with dense woods of elms, chestnuts, and especially of oaks. Archaeology is here confirmed by history; for classical writers contain many references to Italian forests which have now disappeared. As late as the fourth century before our era Rome was divided from central Etruria by the dreaded Ciminian forest, which Livy compares to the woods of Germany. No merchant, if we may trust the Roman historian, had ever penetrated its pathless solitudes; and it was deemed a most daring feat when a Roman general, after sending two scouts to explore its intricacies, led his army into the forest and, making his way to a ridge of the wooded mountains, looked down on the rich Etrurian fields spread out below. In Greece beautiful woods of pine, oak, and other trees still linger on the slopes of the high Arcadian mountains, still adorn with their verdure the deep gorge through which the Ladon hurries to join the sacred Alpheus, and were still, down to a few years ago, mirrored in the dark blue waters of the lonely lake of Pheneus; but they are mere fragments of the forests which clothed great tracts in antiquity, and which at a more remote epoch may have spanned the Greek peninsula from sea to sea.

This is the forest primeval. The murmuring pines and the hemlocks,
Bearded with moss, and in garments green, indistinct in the twilight,
Stand like Druids of eld, with voices sad and prophetic,
Stand like harpers hoar, with beards that rest on their bosoms. 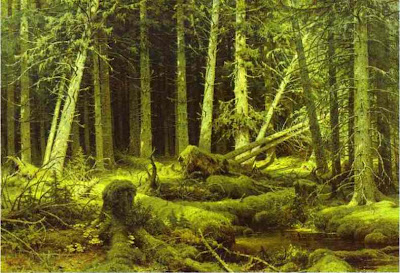