In May, when sea-winds pierced our solitudes,
I found the fresh Rhodora in the woods,
Spreading its leafless blooms in a damp nook,
To please the desert and the sluggish brook.
The purple petals, fallen in the pool,
Made the black water with their beauty gay;
Here might the red-bird come his plumes to cool,
And court the flower that cheapens his array.
Rhodora! if the sages ask thee why
This charm is wasted on the earth and sky,
Tell them, dear, that, if eyes were made for seeing,
Then Beauty is its own excuse for being:
Why thou wert there, O rival of the rose!
I never thought to ask; I never knew:
But in my simple ignorance, suppose
The self-same Power that brought me there brought you.

In Emerson's day, the plant was known as Rhodora canadensis (a genus with a single species), but today it is classified as Rhododendron canadense. Emerson's botanical details are accurate, as consultation of Nathaniel Lord Britton and Addison Brown, An Illustrated Flora of the Northern United States, Canada and the British Possessions, 2nd ed. (New York: Charles Scribner's Sons, 1913; rpt. New York: Dover, 1970), II, 679-680, shows.

Somehow Hochenwartia doesn't have quite the same ring as Rhodora. 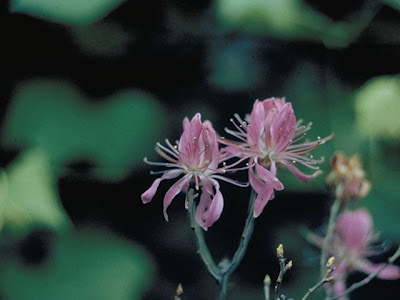