In response to Some Shad-Bush Thoughts, I received some interesting emails from Alan Knell, excerpts from which follow:

I too have planted service trees, but of British / European varieties [I live in Leamington Spa, UK].

I have two Wild Service Trees, Sorbus torminalis. These small trees bear attractive maple-like leaves, turning gold in autumn, and sweet brown fruits maybe a half-inch long. It is an occasional tree in Kent, my home county in the SE of England. Elsewhere it is rare. The bark breaks into a chequer-board pattern in older trees, giving the folk name of 'Chequers Tree', which I believe is the origin of the name of the country house kept for British prime ministers.

I also have a True Service Tree, Sorbus domestica. This is like a giant rowan, except it too bears brown fruits, larger than the wild service tree's berries: 'whitty pears'. I am told the Romans introduced this tree, which is very rare in the wild in Britain. They used it to flavour ale....

We Anglo-Saxons used rowan berries [S. aucuparia] to sharpen the sweetness of ale. Rowan ale used to be served sometimes on high tables in Cambridge and Oxford.

A Medlar completes my collection - Mespilus germanica. This bears fruit like a small, round, rough pear, with a prominent whirl of sepals round the distal end. The appearance suggests a coarse Anglo-Saxon folk name, gentled to 'Openers'. Medlars are harvested in November, stored on the ends in trays. After several weeks they 'blet' - soften and turn black. In this half-rotten state they taste like bananas, I think an unusual flavour before bananas became common. Traditionally they are enjoyed with port wine before a log fire on a cold December evening: an experience I recommend without hesitation. They will blet on the tree, but the birds will strip the lot in days. No doubt you are familiar with Lawrence's poem on the medlar.

I attach a picture of European medlars, half grown, to illustrate the origin of the English common name for the fruits. 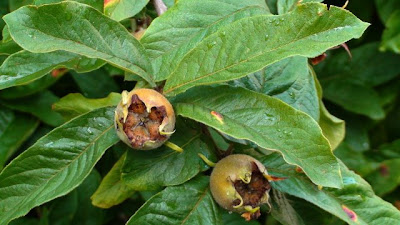 The English common name for the fruits of the medlar is open-arse, "gentled to openers." See the Oxford English Dictionary, s.v. open-arse.

The English word service, as a tree name, comes from Latin sorbus, by way of Middle English serves (plural of serve) and Old English syrfe. See Walter W. Skeat, Notes on English Etymology (Oxford: Clarendon Press, 1901), pp. 266-268, who rejects the derivation of service from cervisia (beer) in R.C.A. Prior, On the Popular Names of British Plants (London: Williams and Norgate, 1863), p. 202. Also to be rejected is the folk etymology mentioned by Charles Fergus, Trees of New England: A Natural History (Guilford: Globe Pequot, 2005), pp. 158-159:

A more colorful story holds that "service" refers to the memorial services that circuit preachers performed in spring, around the time of the juneberries' blossoming, to commemorate settlers who had not survived the preceding winter.

There is useful information in Andrew Dalby, Food in the Ancient World from A to Z (London: Routledge, 2003), p. 306:

Sorb, domesticated tree fruit of southeastern Europe. The sorb is a slow-growing tree. Its fruit ripens late in the season and is never very good to eat fresh. In these various ways the sorb resembles the olive; in addition it fruits only after many years' growth. In the classical Mediterranean sorbs were an important winter fruit: they were halved and sun-dried or else conserved in sapa, light grape syrup. They were also, so Palladius had heard, made into a kind of cider (which is called cormé in modern French).

The sorb or service-apple (Sorbus domestica) is Greek oon, ouon, Latin sorbum. Latin sorbum torminale is the fruit of a related species, probably the chequers-tree (S. torminalis); Pliny is aware of two other kinds, presumably the whitebeam (S. Aria) and the rowan (S. aucuparia).

Here they spend the night in play, and with ale and bitter service-juice joyously mimic draughts of wine.

Until Alan Knell mentioned it, I was unfamiliar with D.H. Lawrence's poem Medlars and Sorb-Apples:

I love you, rotten,
Delicious rottenness.

I love to suck you out from your skins
So brown and soft and coming suave,
So morbid, as the Italians say.

What a rare, powerful, reminiscent flavour
Comes out of your falling through the stages of decay:
Stream within stream.

Something of the same flavour as Syracusan Muscat wine
Or vulgar Marsala.

Though even the word Marsala will smack of preciosity
Soon in the pussyfoot West.

What is it?
What is it, in the grape turning raisin,
In the medlar, in the sorb-apple,

Wineskins of brown morbidity,
Autumnal excrementa;
What is it that reminds us of white gods?

Gods nude as blanched nut-kernels,
Strangely, half sinisterly flesh-fragrant
As if with sweat,
And drenched with mystery.

Sorb-apples, medlars with dead crowns.
I say, wonderful are the hellish experiences,
Orphic, delicate
Dionysos of the Underworld.

A kiss, and a spasm of farewell, a moment's orgasm of rupture
Then a long the damp road alone, till the next turning,
And there, a new partner, a new parting, a new unfusing into twain,
A new gasp of further isolation,
A new intoxication of loneliness, among decaying, frost-cold leaves.

Going down the strange lanes of hell, more and more intensely alone,
The fibres of the heart parting one after the other
And yet the soul continuing, naked-footed, ever more vividly embodied
Like a flame blown whiter and whiter
In a deeper and deeper darkness
Ever more exquisite, distilled in separation.

So, in the strange retorts of medlars and sorb-apples
The distilled essence of hell.
The exquisite odour of leave-taking.
nbsp;   Jamque vale!
Orpheus, and the winding, leaf-clogged, silent lanes of hell.

Each soul departing with its own isolation,
Strangest of all strange companions,
And best.

Medlars, sorb-apples
More than sweet
Flux of autumn
Sucked out of your empty bladders
And sipped down, perhaps, with a sip of Marsala
So that the rambling, sky-dropped grape can add its savour to yours,
Orphic farewell, and farewell, and farewell
And the ego sum of Dionysos
The sono io of perfect drunkenness
Intoxication of final loneliness.

I also owe to Alan Knell a reference to Augusta Paton, "True Service Trees of Worcestershire," Proceedings of the Botanical Society of the British Isles 7.1 (1967) 9-13, which has a curious story on p. 10 belonging to the annals of arboricide:

The final chapter in the history of the Wyre sorb tree is a sad one. This ancient tree, venerated by botanists from all over the country, had become a withered wreck by the middle of the nineteenth century, the top branches alone bearing flowers and fruit at their extremities. In 1858 a large party of naturalists gathered beneath it for lunch: four years later it was destroyed by fire. The miscreant of this dastardly deed was a notorious poacher. He had been sentenced by a local magistrate, Squire Childe of Kinlet, to what he considered too severe a term of imprisonment. In order to spite the squire, who was particularly fond of the sorb tree, he burnt it to the ground. Just retribution speedily followed. The poacher not long afterwards was convicted of setting fire to some farm buildings. He was transported and condemned to spend the rest of his days at Botany Bay.

All that was left of the old sorb tree was a blackened stump and various limbs. These were carefully collected by Mr George Jorden, a well known botanist of Bewdley. Out of these branches he had four goblets made. The most elaborate of them had silver bands round the rim and foot on which were engraved the blossom and early leaves of the tree and the fruit and mature leaves. It was presented to Mr William Matthews, Honorary Secretary of the Severn Valley Field Club.

On the 30th June 1864 about eighty members of this club met at the site of the old tree and around its blackened stump they sang a requiem lamenting the destruction of a tree so long an object of veneration. Unfortunately the words and music sung on this sad occasion have not been recorded.