When asked why he had decided to enlist in the Artists' Rifles in 1915, Edward Thomas stopped, picked up a pinch of earth, and said, 'Literally, for this.'58

Farjeon's book is unavailable to me, but see the last stanza of Edward Thomas' poem Digging:

It is enough
To smell, to crumble the dark earth.
While the robin sings over again
Sad songs of Autumn mirth.

On this Memorial Day, I remember my mother's brother, my Uncle Phil (born June 22, 1925, died August 28, 2007). In World War II he fought as part of 3rd Platoon "E" Co. 2nd Battalion, 511th Parachute Inf., 11th Airborne Division. Five years ago he sent me this first-person account of a near brush with death on the island of Luzon in the Philippines (February, 1945):

When I was in New Guinea, before going to the Philippines, I ran into a paratrooper who had been wounded in combat. He gave me a few tips, which included taking part of a mess kit with me. He said that sometimes a unit is taken out of combat for a few days, it stays on rations. If there is a rear echelon unit with a kitchen close by, they will feed you if you have something to put the food in. So, when we were on Leyte preparing for the jump on Tagatay Ridge, on Luzon, I put the top of my mess kit and a spoon in my pack. After the close house-to-house fighting in and around Manila, the rolling open terrain approaching Ft. McKinley was a welcome change. Generally, the Japs were 200-300 yards away.

On this February day we were moving out to attack towards Ft. McKinley in fairly open terrain. There was not much cover. As a machine gunner, I always carried a carbine, a tripod or machine gun, and sometimes a box of ammunition. I never carried rations, as they would get in the way during a firefight. It was obvious that we did not anticipate any action this early in our advance. That day I had all of the above, along with a box of 5-in-1 rations. Right behind me was my ammo bearer named Lingerfelt. As we moved into an area with some bushes and trees, there was some enemy fire, but we kept on moving. We hit the ground, then ran a ways, then hit the ground again. We lost sight of the two scouts, Squad Leader, and a couple others who had been ahead of us. So we kept moving forward, trying to catch up. As we hurried across an open area, I was hit in the back with what was probably a .30 caliber bullet. It sent me sprawling onto the ground. It felt like someone had hit me with a 2x4. At the same time, Lingerfelt, just a couple yards behind me, was hit by a bullet that creased his ear and went around just inside his helmet, cutting up his helmet liner. At almost the same time, the ammo box that he had been carrying and set down by his head was hit and a couple rounds were exploded.

I thought that I had actually been wounded and maybe could not feel anything because of shock. Lingerfelt said he could see where the bullet went into my pack and where it came out. Lingerfelt was O.K. except for a sore ear. None of our troops were anywhere in sight. Still thinking that our guys were ahead of us, we decided to press on. I had a carbine on one shoulder, a tripod on the other, a box of ammo in one hand, and a box of 5-in-1 rations in the other. I could not run well enough without leaving something behind. I had to have the carbine, tripod, and ammo. The rations were left behind.

What we did not realize was that our company had doubled back to our own lines. Lingerfelt and I would run a few yards then dive onto the ground. All the while we were receiving enemy fire. I do not understand why they did not hit us again. After about 100 more yards, we came to a dirt road crossing the area. We were being fired on from the left so we turned right at the road. During this time we did not see any Japs or Americans.

Meanwhile, back in where our platoon was re-assembling, they realized we were missing. A radioman in our company, (E), overheard a message on his radio requesting that a tank go knock out a two-man "Jap Patrol". He realized that the "Jap Patrol" was us. He was able to contact personnel in the tank organization just in time to stop them from using their .50 cal machine gun. Guys from the tank outfit then came towards us yelling for us to come in. Until then we did not know that the firing from that side was "friendly fire".

When we finally made our way back to "E" Company I opened my pack (Musette Bag). The bullet had entered my pack and hit my mess kit top at about a 45-degree angle. It made a deep groove in the bottom, pushing out the metal for several inches to the end of the mess kit, where it came out through the end, leaving a jagged hole. The bullet also went through an oil bottle, a fairly fresh egg well-packaged in a grenade case, and after leaving the mess kit, it went along the folded olive drab towel which had been positioned between the mess kit and the back of my pack. When the towel was un-folded, it was shredded, and useless.

We ate light that evening due to the 5-in-1 box of rations left behind. 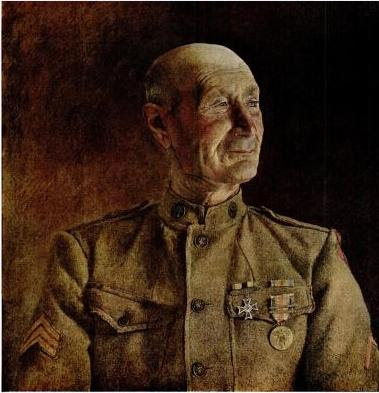