A thousand thanks, my dear Sir, for your kind offer of the books you mention. But I have already felt myself obliged to decline similar offers, lest by connecting the study of writers upon Homer and about him with the study of Homer himself, I should not live long enough to reach the end of my undertaking. I am not vain enough to think that they could not assist me, but I am too old to have so much time to spare as they would cost me.

Literature is in real danger of being choked by its parasite, commentary. So I will end this little book, ut vineta egomet caedam mea, with a piece of advice which the first Lord Selborne gave to the late H.M. Wilkins, and Wilkins passed on to me,—we were all Scholars of Trinity, Oxford. It is this: READ THE CLASSICS RATHER THAN BOOKS ABOUT THE CLASSICS. 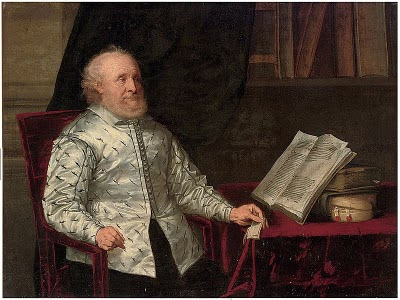 Anonymous (English, 17th century), Portrait of a Bibliophile
# posted by Michael Gilleland @ 3:57 AM