The boy who was called up first was a clever, merry School House boy, one of their set: he was some connection of the Doctor's and a great favourite, and ran in and out of his house as he liked, and so was selected for the first victim.

'Triste lupus stabulis,' began the luckless youngster, and stammered through some eight or ten lines.

'There, that will do,' said the Doctor, 'now construe.'

On common occasions, the boy could have construed the passage well enough probably, but now his head was gone.

A shudder ran through the whole form, and the Doctor's wrath fairly boiled over; he made three steps up to the construer, and gave him a good box on the ear. The blow was not a hard one, but the boy was so taken by surprise that he started back; the form caught the back of his knees, and over he went on to the floor behind. There was a dead silence over the whole school; never before and never again while Tom was at school did the Doctor strike a boy in lesson. The provocation must have been great. However, the victim had saved his form for that occasion, for the Doctor turned to the top bench, and put on the best boys for the rest of the hour; and though, at the end of the lesson, he gave them all such a rating as they did not forget, this terrible field-day passed over without any severe visitations in the shape of punishments or floggings. Forty young scapegraces expressed their thanks to the 'sorrowful wolf' in their different ways before second lesson.

Baneful to the folds is the wolf, to the ripe crop the rains, to trees the gales, and to me the anger of Amaryllis!

Neut. adj. used as subst. = 'a bane': the word as its position shews goes with all the four clauses which follow—'a bane is the wolf to the fold, rain to the...'.

Such expressions as triste lupus stabulis are not deviations from a normal tristis lupus stabulis (as I fear some students are led to think), but have a different meaning and therefore a different form. There is no more necessity to account elaborately for triste than there would have been to account for exitium, if exitium had been used instead. Tristis is 'a grievous he or she,' triste is 'a grief.'

The unfortunate boy's punishment seems to have been a variation of "the plain blip for numskulls," as shown below: 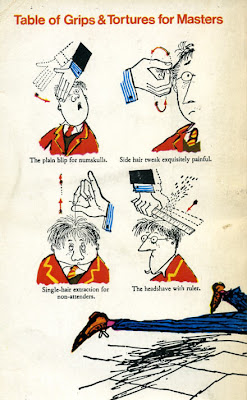 Hat tip for the illustration above: Roger Pearse.