The pigs during the greater part of the year are left to support nature as they can, and in gauntness resemble those greyhound-looking animals which pass for porkers in France. When the acorns are ripe and fall from the trees, the greedy animals are turned out in legions from the villages, which more correctly may be termed coalitions of pigsties. They return from the woods at night, of their own accord, and without a swine's general. On entering the hamlet, all set off at a full gallop, like a legion possessed with devils, in a handicap for home, into which each single pig turns, never making a mistake. We have more than once been caught in one of these pig-deluges, and nearly carried away horse and all, as befell Don Quixote, when really swept away by the "far-spread and grunting drove." In his own home each truant is welcomed like a prodigal son or a domestic father. These pigs are the pets of the peasants; they are brought up with their children, and partake, as in Ireland, in the domestic discomforts of their cabins; they are universally respected, and justly, for it is this animal who pays the "rint;" in fact, are the citizens, as at Sorrento, and Estremenian man is quite a secondary formation, and created to tend herds of these swine, who lead the happy life of former Toledan dignitaries, with the additional advantage of becoming more valuable when dead.

It is astonishing how rapidly they thrive on their sweet food; indeed it is the whole duty of a good pig—animal propter convivia natum—to get as fat and as soon as he can, and then die for the good of his country. It may be observed for the information of our farmers, that those pigs which are dedicated to St. Anthony, on whom a sow is in constant attendance, as a dove was on Venus, get the soonest fat; therefore in Spain young porkers are sprinkled with holy water on his day, but those of other saints are less propitious, for the killing takes place about the 10th and 11th of November, or, as Spaniards date it, por el St. Andres, on the day of St. Andrew, or on that of St. Martin; hence the proverb "every man and pig has his St. Martin or his fatal hour, á cada puerco su San Martin."

The death of a fat pig is as great an event in Spanish families, who generally fatten up one, as the birth of a baby; nor can the fact be kept secret, so audible is his announcement. It is considered a delicate attention on the part of the proprietor to celebrate the auspicious event by sending a portion of the chitterlings to intimate friends. The Spaniard's proudest boast is that his blood is pure, that he is not descended from pork-eschewing Jew or Moor—a fact which the pig genus, could it reason, would deeply deplore. The Spaniard doubtless has been so great a consumer of pig, from grounds religious, as well as gastronomic. The eating or not eating the flesh of an animal deemed unclean by the impure infidel, became a test of orthodoxy, and at once of correct faith as well as of good taste; and good bacon, as has been just observed, is wedded to sound doctrine and St. Augustine. The Spanish name Tocino is derived from the Arabic Tachim, which signifies fat.

The Spaniards however, although tremendous consumers of the pig, whether in the salted form or in the skin, have to the full the Oriental abhorrence to the unclean animal in the abstract. Muy puerco is their last expression for all that is most dirty, nasty, or disgusting. Muy cochina never is forgiven, if applied to woman, as it is equivalent to the Italian Vacca, and to the canine feminine compliment bandied among our fair sex at Billingsgate; nor does the epithet imply moral purity or chastity; indeed in Castilian euphuism the unclean animal was never to be named except in a periphrasis, or with an apology, which is a singular remnant of the Moorish influence on Spanish manners. Haluf or swine is still the Moslem's most obnoxious term for the Christians, and is applied to this day by the ungrateful Algerines to their French bakers and benefactors, nay even to the "illustre Bugeaud."

The capital of the Estremenian pig-districts is Montanches—mons anguis—and doubtless the hilly spot where the Duke of Arcos fed and cured "ces petits jambons vermeils," which the Duc de St. Simon ate and admired so much; "ces jambons ont un parfum si admirable, un goût si relevé et si vivifiant, qu'on en est surpris: il est impossible de rien manger si exquis." His Grace of Arcos used to shut up the pigs in places abounding in vipers, on which they fattened. Neither the pigs, dukes, nor their toadeaters seem to have been poisoned by these exquisite vipers. According to Jonas Barrington, the finest Irish pigs were those that fed on dead rebels: one Papist porker, the Enniscorthy boar, was sent as a show, for having eaten a Protestant parson: he was put to death and dishonoured by not being made bacon of.

Naturalists have remarked that the rattlesnakes in America retire before their consuming enemy, the pig, who is thus the gastador or pioneer of the new world's civilization, just as Pizarro, who was suckled by a sow, and tended swine in his youth, was its conqueror. Be that as it may, Montanches is illustrious in pork, in which the burgesses go the whole hog, whether in the rich red sausage, the chorizo, or in the savoury piquant embuchados, which are akin to the mortadelle of Bologna, only less hard, and usually boiled before eating, though good also raw; they consist of the choice bits of the pig seasoned with condiments, with which, as if by retribution, the paunch of the voracious animal is filled; the ruling passion strong in death....The fat of these jamones, whence our word ham and gammon, when they are boiled, looks like melted topazes, and the flavour defies language, although we have dined on one this very day, in order to secure accuracy and undeniable prose, like Lope de Vega, who, according to his biographer, Dr. Montalvan, never could write poetry unless inspired by a rasher; " Toda es cosa vil," said he, "á donde falta un pernil" (in which word we recognize the precise perna whereby Horace was restored):—

Therefore all writing is a sham,
Where there is wanting Spanish ham.

Those of Gallicia and Catalonia are also celebrated, but are not to be compared for a moment with those of Montanches, which are fit to set before an emperor. Their only rivals are the sweet hams of the Alpujarras, which are made at Trevelez, a pig-hamlet situated under the snowy mountains on the opposite side of Granada, to which also we have made a pilgrimage. They are called dulces or sweet, because scarcely any salt is used in the curing; the ham is placed in a weak pickle for eight days, and is then hung up in the snow; it can only be done at this place, where the exact temperature necessary is certain. 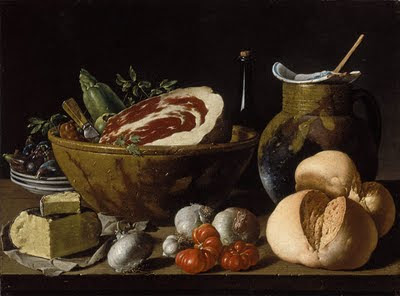