A Close Connection Between the Skin and the Memory

Thanks to Eric Thomson for what follows.


A volume of John Muir has just come to light this morning....I opened the book at random and came across this passage, which I thought you'd like.

An exciting time came when at the age of seven or eight years I left the auld Davel Brae school for the grammar school. Of course I had a terrible lot of fighting to do, because a new scholar had to meet every one of his age who dared to challenge him, this being the common introduction to a new school. It was very strenuous for the first month or so, establishing my fighting rank, taking up new studies, especially Latin and French, getting acquainted with new classmates and the master and his rules. In the first few Latin and French lessons the new teacher, Mr. Lyon, blandly smiled at our comical blunders, but pedagogical weather of the severest kind quickly set in, when for every mistake, everything short of perfection, the taws was promptly applied. We had to get three lessons every day in Latin, three in French, and as many in English, besides spelling, history, arithmetic, and geography. Word lessons in particular, the wouldst-couldst-shouldst-have-loved kind, were kept up, with much warlike thrashing, until I had committed the whole of the French, Latin, and English grammars to memory, and in connection with reading-lessons we were called on to recite parts of them with the rules over and over again, as if all the regular and irregular incomprehensible verb stuff was poetry. In addition to all this, father made me learn so many Bible verses every day that by the time I was eleven years of age I had about three fourths of the Old Testament and all of the New by heart and by sore flesh. I could recite the New Testament from the beginning of Matthew to the end of Revelation without a single stop. The dangers of cramming and of making scholars study at home instead of letting their little brains rest were never heard of in those days. We carried our school-books home in a strap every night and committed to memory our next day's lessons before we went to bed, and to do that we had to bend our attention as closely on our tasks as lawyers on great million-dollar cases. I can't conceive of anything that would now enable me to concentrate my attention more fully than when I was a mere stripling boy, and it was all done by whipping,—thrashing in general. Old-fashioned Scotch teachers spent no time in seeking short roads to knowledge, or in trying any of the new-fangled psychological methods so much in vogue nowadays. There was nothing said about making the seats easy or the lessons easy. We were simply driven pointblank against our books like soldiers against the enemy, and sternly ordered, "Up and at 'em. Commit your lessons to memory!" If we failed in any part, however slight, we were whipped; for the grand, simple, all-sufficing Scotch discovery had been made that there was a close connection between the skin and the memory, and that irritating the skin excited the memory to any required degree.

It struck me that round about the same time (they were born within three years of each other, the one in 1838 and the other in 1835), and only fifty miles away (the distance from Dunbar to Dunfermline), another Scot and very different future American was being subjected to a similar regime:

[The school] was housed in a one-room school-house, with a tiny fireplace near the front door that barely removed the chill. Martin's desk was on an elevated podium. On it sat his "lum", or satin high hat, and his "tawse", a leather strap employed regularly on those he found sleeping or slovenly or just stupid. The classroom was arrayed in "forms", rows of stiff-backed benches on which scholars sat, ranged in order of age and accomplishment. Each form was ruled by an older student who acted as form monitor or dictator. Martin, whom his daughter later described as "tall, though stoop-shouldered," provided the monitors with words or sums which they dictated to their forms, each member of which was expected to copy the dictation on his or her slate and/or recite it in unison to the "dictator". While the instruction proceeded on the floor below, Martin watched from his perch, on the ready to hurl his tawse at a recalcitrant scholar, who was bidden to retrieve it, return it to the podium, and receive a lash across his hands.

Readers will wait in vain for damning verdicts from either:

Muir: "All these various thrashings were admirably influential in developing not only memory but fortitude as well." Ibid., p. 29.

Carnegie: "The school was a perfect delight to me and if anything occurred which prevented my attendance I was unhappy." Autobiography of Andrew Carnegie (Boston: Houghton Mifflin, 1920), p. 20. 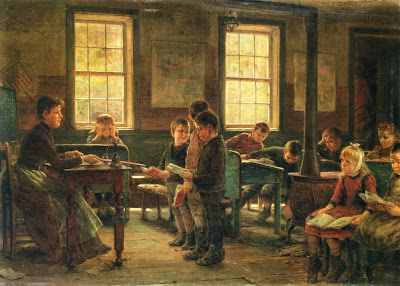