[T]he Loafer quits the village; and now the world is before him. Shall he sit on a gate and smoke? or lie on the grass and smoke? or smoke aimlessly and at large along the road? Such a choice of happiness is distracting; but perhaps the last course is the best—as needing the least mental effort of selection. Hardly, however, has he fairly started his first daydream when the snappish "ting" of a bellkin recalls him to realities. By comes the bicyclist: dusty, sweating, a piteous thing to look upon. But the irritation of the strepitant metal has jarred the Loafer's always exquisite nerves: he is fain to climb a gate and make his way towards solitude and the breezy downs.

Up here all vestiges of a sordid humanity disappear. The Loafer is alone with the south-west wind and the blue sky. Only a carolling of larks and a tinkling from distant flocks break the brooding noonday stillness; above, the wind-hover hangs motionless, a black dot on the blue. Prone on his back on the springy turf, gazing up into the sky, his fleshy integument seems to drop away, and the spirit ranges at will among the tranquil clouds. This way Nirvana nearest lies. Earth no longer obtrudes herself; possibly somewhere a thousand miles or so below him the thing still "spins like a fretful midge." The Loafer knows not nor cares. His is now an astral body, and through golden spaces of imagination his soul is winging her untrammelled flight. And there he really might remain for ever, but that his vagrom spirit is called back to earth by a gentle but resistless, very human summons,—a gradual, consuming, Pantagruelian, god-like, thirst: a thirst to thank Heaven on. So, with a sigh half of regret, half of anticipation, he bends his solitary steps towards the nearest inn. Tobacco for one is good; to commune with oneself and be still is truest wisdom; but beer is a thing of deity—beer is divine.

Anent "beer is divine", Eric Thomson sends this delightful illustration by Arthur Rackham for Grahame's The Wind in the Willows, with the caption "He presently reappeared, somewhat dusty, with a bottle of beer in each paw and another under each arm": 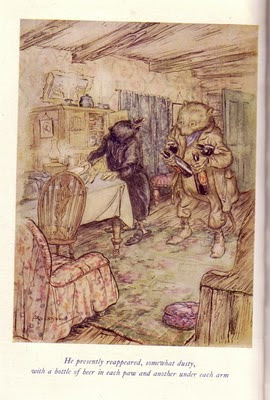