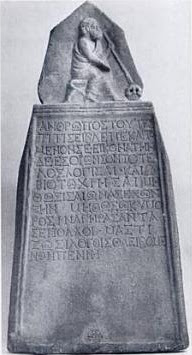 On top of the stele is an image of an old man sitting down. In his left hand he holds a staff, which is resting on what seems to be a skull. Here is the Greek text, from Georg Kaibel, Epigrammata Graeca ex lapidibus conlecta (Berlin: Reimer, 1878), p. 115, number 303:

This is a man; see who you are and what awaits you;
looking at this image consider your end,
and use your possessions neither as going to live forever
nor as going to die early, with the result so that when you're old many
will assail you with words as being oppressed by poverty.

The first two verses are simple to understand. The train of thought in the last three verses is somewhat convoluted, but the underlying meaning seems to be as follows:

Enjoy thy possessions as if about to die, and use thy goods sparingly as if about to live. That man is wise who understands both these commandments, and hath applied a measure both to thrift and unthrift.