Nothing ever interfered with his reading. He always had several books on hand at once. The latest work on science might be found propped up on the mantelpiece of his bedroom to vary the process of dressing, and Lady Frances once declared that she suspected him of "making a raft of his sponge" to support a French novel while he took his bath. It was seldom that some work by Edgar Wallace or P.G. Wodehouse was absent from his bedside after these authors rose to fame, and the table by his arm-chair was always heaped with books of history, or Memoirs. It would be difficult to define the limits of his reading. Its range could astonish even his oldest friends, as for instance when, staying with Lord and Lady Desborough at Taplow Court on the eve of a General Election, he carried off to his bedroom a manual on chess, a game which since his boyhood he was never seen to play. Serious fiction was perhaps the only class of book upon which he was cautious of embarking. He never began a new novel until he was assured that it ended well. If no such assurance was forthcoming, he fell back upon Scott, Jane Austen, Kipling, and Stevenson.

He chose "The Pleasures of Reading" for the subject of his Rectorial Address to St. Andrews University in 1887, and there gave his personal answer to that most personal of questions—what to read and how to read it. Mr. Frederic Harrison had lately given forth some portentous warnings against "gorging and enfeebling" the intellect by over-indulgence in carelessly chosen literature. Balfour suggested that the analogy between the human mind and the human stomach might be pressed too far. He had never himself met the person whose natural gifts had been overloaded with learning. No doubt many learned people were dull, but not because they were learned. "True dullness is seldom acquired. It is a natural grace, the manifestations of which, however modified by education, remain in substance the same." People should not be afraid to read what they enjoyed. Idle curiosity, so-called, was a thing to be encouraged. Here follows a passage which might well mislead posterity into supposing Balfour a newspaper addict, ingeniously defending his favourite vice. The exhaustive study of the morning and evening papers was "only a somewhat unprofitable exercise of that disinterested love of knowledge that moves men to penetrate the Polar snows, or to explore the secrets of the remotest heavens.... It can be turned, and it should be turned into a curiosity for which nothing...can be wholly alien or uninteresting."

Such being his views, Balfour was naturally a lavish book-buyer. The library at Whittingehame is a large room, well stocked before his day with standard works of every kind. Soon it overflowed, and other rooms were lined with shelves. His own sitting-room was packed from floor to ceiling, mainly with books on philosophy and theology, and its sofas were heaped with flotsam and jetsam of current publications. The books at Whittingehame had an alert look about them, as if expecting to be pulled out at any moment. They were, in fact, often temporarily lost, for the ever-growing library was too large to be kept in order by the family's spasmodic efforts at arrangement, continually begun, but never ended. If Balfour was found wandering down the corridor at unwonted hours he was most likely in search of some book, and his relations would rush to proffer conflicting evidence about the present position of the missing volume.

"Read everything you find interesting and nothing that you don't," was nearly the sum-total of his advice to the younger generation with regard to literature. It sounded easy, yet to try to keep up with him along any of his primrose paths to knowledge, was to discover how deceptive was that apparently leisurely pace. 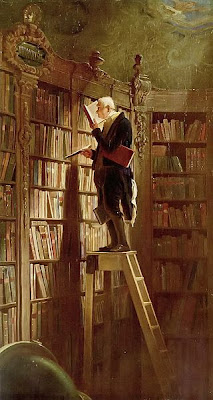 Carl Spitzweg, The Bookworm
# posted by Michael Gilleland @ 7:16 AM