In my French and Latin translations I adopted an excellent method, which, from my own success, I would recommend to the imitation of students. I chose some classic writer, such as Cicero and Vertot, the most approved for purity and elegance of style. I translated, for instance, an epistle of Cicero into French; and after throwing it aside, till the words and phrases were obliterated from my memory, I re-translated my French into such Latin as I could find; and then compared each sentence of my imperfect version, with the ease, the grace, the propriety of the Roman orator. A similar experiment was made on several pages of the Revolutions of Vertot; I turned them into Latin, re-turned them after a sufficient interval into my own French, and again scrutinized the resemblance or dissimilitude of the copy and the original. By degrees I was less ashamed, by degrees I was more satisfied with myself; and I persevered in the practice of these double translations, which filled several books, till I had acquired the knowledge of both idioms, and the command at least of a correct style. This useful exercise of writing was accompanied and succeeded by the more pleasing occupation of reading the best authors. The perusal of the Roman classics was at once my exercise and reward. Dr. Middleton's History, which I then appreciated above its true value, naturally directed me to the writings of Cicero. The most perfect editions, that of Olivet, which may adorn the shelves of the rich, that of Ernesti, which should lie on the table of the learned, were not in my power. For the familiar epistles I used the text and English commentary of Bishop Ross: but my general edition was that of Verburgius, published at Amsterdam in two large volumes in folio, with an indifferent choice of various notes. I read with application and pleasure all the epistles, all the orations, and the most important treatises of rhetoric and philosophy; and as I read, I applauded the observation of Quintilian, that every student may judge of his own proficiency, by the satisfaction which he receives from the Roman orator. I tasted the beauties of language, I breathed the spirit of freedom, and I imbibed from his precepts and examples the public and private sense of a man. Cicero in Latin, and Xenophon in Greek, are indeed the two ancients whom I would first propose to a liberal scholar; not only for the merit of their style and sentiments, but for the admirable lessons, which may be applied almost to every situation of public and private life. Cicero's Epistles may in particular afford the models of every form of correspondence, from the careless effusions of tenderness and friendship, to the well guarded declaration of discreet and dignified resentment. After finishing this great author, a library of eloquence and reason, I formed a more extensive plan of reviewing the Latin classics, under the four divisions of, 1. historians, 2. poets, 3. orators, and 4. philosophers, in a chronological series, from the days of Plautus and Sallust, to the decline of the language and empire of Rome: and this plan, in the last twenty-seven months of my residence at Lausanne (January 1756—April 1758), I nearly accomplished. Nor was this review, however rapid, either hasty or superficial. I indulged myself in a second and even a third perusal of Terence, Virgil, Horace, Tacitus, etc., and studied to imbibe the sense and spirit most congenial to my own. I never suffered a difficult or corrupt passage to escape, till I had viewed it in every light of which it was susceptible: though often disappointed, I always consulted the most learned or ingenious commentators, Torrentius and Dacier on Horace, Catrou and Servius on Virgil, Lipsius on Tacitus, Meziriac on Ovid, etc., and in the ardour of my inquiries, I embraced a large circle of historical and critical erudition. My abstracts of each book were made in the French language: my observations often branched into particular essays; and I can still read, without contempt, a dissertation of eight folio pages on eight lines (287-294) of the fourth Georgic of Virgil. M. Deyverdun, my friend, whose name will be frequently repeated, had joined with equal zeal, though not with equal perseverance, in the same undertaking. To him every thought, every composition, was instantly communicated; with him I enjoyed the benefits of a free conversation on the topics of our common studies.

But it is scarcely possible for a mind endowed with any active curiosity to be long conversant with the Latin classics, without aspiring to know the Greek originals, whom they celebrate as their masters, and of whom they so warmly recommend the study and imitation;

It was now that I regretted the early years which had been wasted in sickness or idleness, or mere idle reading; that I condemned the perverse method of our schoolmasters, who, by first teaching the mother-language, might descend with so much ease and perspicuity to the origin and etymology of a derivative idiom. In the nineteenth year of my age I determined to supply this defect; and the lessons of Pavilliard again contributed to smooth the entrance of the way, the Greek alphabet, the grammar, and the pronunciation according to the French accent. As he had possessed only such a stock as was requisite for an ecclesiastic, our first book was St. John's gospel, and I should probably have construed the whole of the New Testament, had I not represented the absurdity of adhering to the corrupt dialect of the Hellenist Jews. At my earnest request we presumed to open the Iliad; and I had the pleasure of beholding, though darkly and through a glass, the true image of Homer, whom I had long since admired in an English dress. After my tutor had left me to myself, I worked my way through about half the Iliad, and afterwards interpreted alone a large portion of Xenophon and Herodotus. But my ardour, destitute of aid and emulation, was gradually cooled, and, from the barren task of searching words in a lexicon, I withdrew to the free and familiar conversation of Virgil and Tacitus. Yet in my residence at Lausanne I had laid a solid foundation, which enabled me, in a more propitious season, to prosecute the study of Grecian literature. 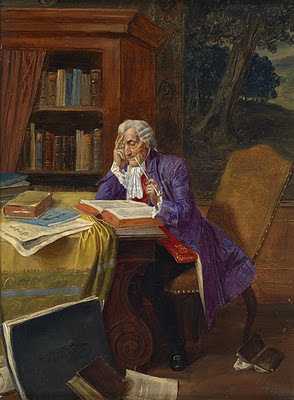