Pans and a Pan

For such a short poem, this contains several unusual locutions, according to A.S.F. Gow and D.L. Page, The Greek Anthology: The Garland of Philip and Some Contemporary Epigrams (Cambridge: Cambridge University Press, 1968), vol. II, p. 320. In what follows I've put the words in dictionary lemma form:


Bronze statuette of Pan, from the Temple of Artemis at Lousoi in Arcadia, 5th century B.C. (Berlin, Staatliche Museen, Antikenabteilung, inv. no. Misc. 8624): 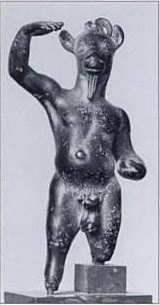 Another view of the same: Our account of Arcadian bronzes may be concluded by a description of the goat-headed Pan from Lousoi at Berlin...A creature of the wilds, he stands shading his eyes with one hand: the other may have held a pedum or short crook: his right leg is advanced as though he is ready to leap forward. He has a beautiful fringe of hair down his back: the hair on his body and eyelashes are most carefully engraved. Much care has also been expended on the modelling of the head, muzzle and hands: between the horns is a hole, in which some ornament could have been inserted. The surface shews flaws from defective casting: one hole, in the right shoulder, has been filled in, but not the others. The work is that of a skilled and practiced hand, evidently not that of an Arcadian, but nowhere else, save perhaps in the Homeric Hymn to Pan, has the spirit of Arcadia been so fitly embodied.