At My Own Doorstep

I used to dream of exotic animals in far-off places, the steaming jungles of South America or the plains of East Africa. I still do. But with time I'm discovering more and more excitement at my own doorstep. Much of nature is subtle, and it is difficult to appreciate it if one is used to the grandiose. I doubt that I would have stopped to watch a mere beetle, a bird, or an ant if I had had a toy train to play with when I was young—a train that rumbled and tooted and sped on fast tracks at the touch of a button. I became attuned to spending hours watching a bird just to see what it brought back to the nest, getting pleasure from discovering the subtleties. It is the subtlety of a bird or a carabid or an ant, multiplied a few million times over, that makes the whole. If one is not attuned to the fact of the first subtlety, then all the rest can pass unnoticed also, just as one sees only the train with the loud whistle rumbling past.

Living on my hill has given me a store of observations and ideas that vary in detail from sightings, like those of the beetles and wasps, to impressions and to qualitative observations, like those of my ants. Any one of them could potentially be expanded into a full-blown research project. Yet the projects I have already done on bees, wasps, and moths show me projects that still need to be done in those areas; the more questions you answer, the more are revealed. "Completed" projects are often jumping-off places for others, and thus you maintain momentum in a certain direction.

Although a number of factors might predispose me to specific projects, I am also open to unforeseen events. Throughout my life so far, I have never been able to predict all of what the next day will bring. Here on my hill there are interesting things all around me. I don't know beforehand what I will see, what ideas I will have, and what ideas and observations of other researchers will make me curious about things I might otherwise take for granted. What I do know is that there is enough here to occupy me a lifetime. 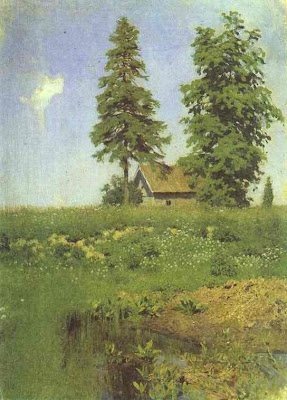 Isaak Levitan, Small Hut in a Meadow
Thanks to my daughter, who gave me Heinrich's book as a Christmas present.