Thanks to Eric Thomson for what follows.


Arthur Ransome's 'Bohemia in London' is a fine evocation of literary London, Johnson's mainly but also Lamb's. Chapter IX is devoted to bookshops.

Summer and winter, book-buyers range up and down the street; book-buyers who mean to buy, book-buyers who would buy if they could, and book-buyers who have bought, and are now tormenting themselves by looking for bargains that they might have made, choicer than those they have already clinched. There is a rare joy in picking books from the stalls without the interference of any commercial fingers; a great content in turning over the pages of a book, a Cervantes perhaps, or a Boccaccio, or one of the eighteenth-century humourists, catching sight here and there of a remembered smile, and chuckling anew at the remembrance, putting the book down again, rather hurriedly, as if to decide once for all that you must not buy it, and then picking up another and repeating the performance. And then, the poignant, painful self-abandon when at last you are conquered, and a book leads you by the hand to the passionless little man inside the shop, and makes you pay him money, the symbol, mean, base, sordid in itself, but still the symbol, that the book has won, and swayed the pendulum of your emotions past the paying point.

I remember the buying of my "Anatomy of Melancholy" (that I have never read, nor ever mean to—I dare not risk the sweetness of the title); two big beautiful volumes, with a paper label on the back of each, they stood imperious on the shelves. I had seven-and-sixpence in the world, and was on my way up to Soho for dinner. I took one volume down, and turned the thick old leaves, and ran my eye over the black print, broken and patterned by quotations in italics, Latin quotations everywhere making the book a mosaic in two languages. To sit and smoke in front of such a book would be elysium. I could, of course, have got a copy at a library but then I did not want to read it. I wanted to own it, to sit in front of it with a devotional mind, to let my tobacco smoke be its incense, to worship its magnificent name; and here it was in such a dress as kings and hierarchs among books should wear. If I were ever to have a Burton, this Burton would I have. I remember I laid the book down, and stoically lit a pipe, before daring to look at the flyleaf for the pencilled price. Just then another man, one with the air of riches, walked casually up to the stall, and, fearful for my prize and yet timorous of its cost, I seized it and turned with trembling fingers back to the beginning:

Turning my purse inside out, I went in, with the two volumes and the three half-crowns, to come to some agreement with the bookseller. He let me have the books, but dinner vanished for that night, as the meats from the table of Halfdan the Black, and I had to walk to Chelsea. But what a joyous walk that was in the early autumn evening! Those two heavy volumes, one under each arm, swung me up the hill from Piccadilly as if they had been magic wings. The feel of them on my sides sent my heart beating and my face into smiles. One of the volumes was uncut—UNCUT. My landlord met me at the door with my bill. "The Devil!" my heart said; "I will attend to it," uttered my lips; and upstairs, penniless, by the light of a candle, that is, after all, as Elia has it, "a kindlier luminary than sun or moon," I spent three hours cutting that volume, leaf by leaf, happier than can well be told. 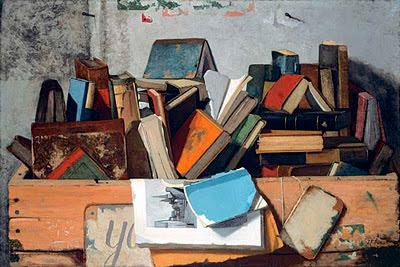