A Great Achievement of Culinary Art

Talking of vegetables: can the inhabited globe offer anything to vie with the English potato justly steamed? I do not say that it is always—or often—to be seen on our tables, for the steaming of a potato is one of the great achievements of culinary art; but when it is set before you, how flesh and spirit exalt! A modest palate will find more than simple comfort in your boiled potato of every day, as served in the decent household. New or old, it is beyond challenge delectable. Try to think that civilized nations exist to whom this food is unknown—nay, who speak of it, on hearsay, with contempt! Such critics, little as they suspect it, never ate a potato in their lives. What they have swallowed under that name was the vegetable with all its exquisite characteristics vulgarized or destroyed. Picture the "ball of flour" (as old-fashioned housewives call it) lying in the dish, diffusing the softest, subtlest aroma, ready to crumble, all but to melt, as soon as it is touched; recall its gust and its after-gust, blending so consummately with that of the joint, hot or cold. Then think of the same potato cooked in any other way, and what sadness will come upon you! 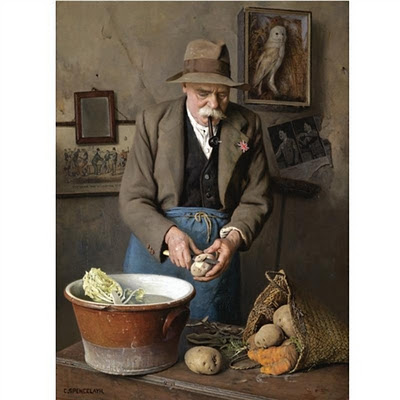