Great is Zeus of the Twin Oaks. Stratoneikos son of Euangelos because of ignorance cut down one of the oaks belonging to Zeus Didymeites. And the god mobilized his own power because he (i.e. Stratoneikos) did not believe in him, and placed him ... in a deathlike condition. He was saved from great danger and raised the stele in gratitude. I declare that no one shall ever show contempt for his powers and cut down an oak. In the year 279, on the 18th of the month Panêmos. 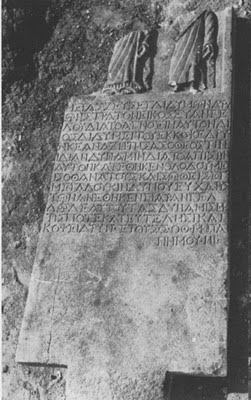 Another inscription, found about 10 kilometers south of the one above, dated 235/236 A.D. (Sullan year 320), translated by Aslak Rostad, Human Transgression - Divine Retribution: a study of religious transgressions and punishments in Greek cultic regulations and Lydian-Phrygian reconciliation inscriptions (diss. Bergen, 2006), p. 295:

In the year 320, on the 12th of the month Peritos. Because I, Aurelius Stratonikos son of Stratonikos, in ignorance cut down trees belonging to the gods Zeus Sabazios and Artemis Anaitis in the grove, I was punished and raised the sign of gratitude after having promised to do so.

But the presence of trees can lead to another human activity illustrated on and mentioned by Sabazius monuments, namely tree-cutting. On the extreme right of the Ampurias plaque (II, 85) we see a little figure armed with an axe, as if about to take a whack at the right-hand tree, which is clearly a pine. What are we to make of him? On the one hand, the axe may be a symbol of divine power, as shown, by Men on the coins of Alia. On the other hand we know that in the so-called Katakekaumene there was a grove sacred to Zeus Sabazius and Artemis Anaetis, which we have already discussed. In this part of the world, Sabazius, as we have already had occasion to mention, enters into the number of the gods who are recipients of the so-called confessional steles, which give accounts of misfortunes which befall men as a result of offenses against the gods. The offenses must be expiated and the gods propiated. In one of these inscriptions, II, 33, a certain Aurelios Stratoneikos admits to having cut, out of ignorance, trees of these divinities out of their grove. He is punished in an unspecified way, makes a vow to the gods [to set up a stele if healed, is in fact healed], thanks them, and sets the stele up. This homely account may possibly shed light on the axe-carrying figure of the Ampurias plaque. For it is probably better to see the small figure, not as carrying a symbol of the god's power, but as an opponent of the god, ready to cut his sacred pine-tree. 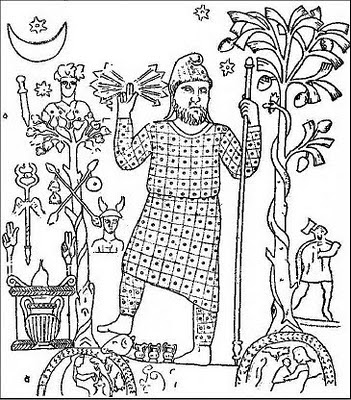