Who among us has not stopped, on his way through the Palais-Royal, before Chevet's windows? It was a pleasure which the most spiritual-minded could not deny himself, for putting aside all ideas of good cheer, the splendid grouping of provisions could be admired just like a painting by Snyders, Weenincx or de Fyt. Outside hung roebucks, their black muzzles touching the heads of wild boars, stuffed with pistachios, and turning up their lips in grim fashion. On the white marble slabs, the great sea fish, laid on their sides, shimmered with silvery and pearly hues; lobsters marked with brown and yellow waved their formidable claws, and turtles gambolled awkwardly on the edge of the basin fringed with moss, in which, under the light splashing of a thin jet of water, swam Chinese carps. Close by, delicate pullets of le Mans, and turkeys of extraordinary size swelled out their breasts, distended and marbled of a blue tint by the truffles that showed through their thin skins. Grouse, pheasants in golden bronze plumage, Scotch ptarmigans, Russian hazel grouse, partridges with legs prettily gaitered with pink, seemed to be posing purposely for the pleasure of painters as much as for that of gourmets.

I shall not speak of the pâtés de foie gras, of the Corsican blackbird pasties, of the brochettes of ortolans, and other " gallantries," as they say in Hamburg, but I cannot help recalling the Thommery grapes, golden as amber, the Montreuil peaches, which were not cheap two-penny half-penny peaches, despised by Alexandre Dumas the younger, but veritable virgin peaches that had lost none of their velvety bloom; the pomegranates, the bursting skin of which allowed a casket of rubies to show; the pears, so perfect that they seemed carved out of Florentine alabaster and intended to be served upon the tables of precious stones of the former Grand Dukes of Tuscany; in a word, the whole of that lovely assemblage of shapes and colours, that savoury Pantagruelian bouquet arranged with such consummate art.

Some paintings by Frans Snyders: 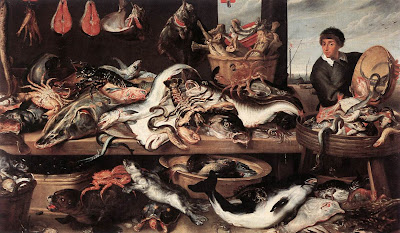 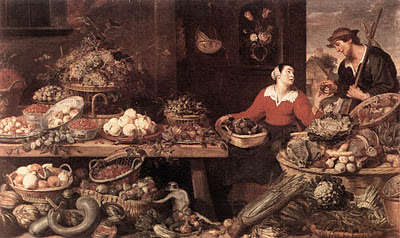 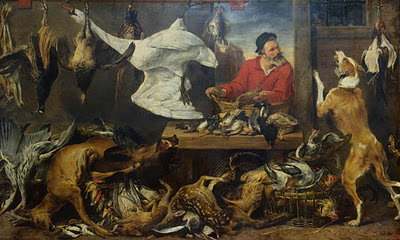