On the topic of preaching, Eric Thomson today contributes a sample of 19th century pulpit oratory and a picture. First the sermon fragments, as recorded in Kilvert's Diary 1870-1879: Selections from The Diary of the Reverend Francis Kilvert, edited by William Plomer (New York: Macmillan, 1947), pp. 150-151 (Friday, July 14, 1871):


The afternoon became lovely, very hot, and being early for the 3.15 return train I strolled across the meadows near the Moorfields Station. I got out at Whitney and went to the Rectory. I dined with the girls and their father. He told me of the sermons which old Mr. Thomas the Vicar of Disserth used to preach as they were described to him by the Venables. He would get up in the pulpit without an idea about what he was going to say, and would begin thus. 'Ha, yes, here we are. And it is a fine day. I congratulate you on the fine day, and glad to see so many of you here. Yes indeed. Ha, yes, very well. Now then I shall take for my text so and so. Yes. Let me see. You are all sinners and so am I. Yes indeed.' Sometimes he would preach about 'Mr. Noe'. 'Mr. Noe, he did go on with the ark, thump, thump, thump. And the wicked fellows did come and say to him "Now, Mr. Noe, don't go on there, thump, thump, thump, come and have a pint of ale at the Red Lion. There is capital ale at the Red Lion, Mr. Noe." For Mr. Noe was situated just as we are here, there was the Red Lion close by the ark, just round the corner. Yes indeed. But Mr. Noe he would not hearken to them, and he went on thump, thump, thump. Then another idle fellow would say, "Come Mr. Noe the hounds are running capital, yes indeed. Don't go on there thump, thump, thump." But Mr. Noe he did never heed them, he just went on with his ark, thump, thump, thump.' 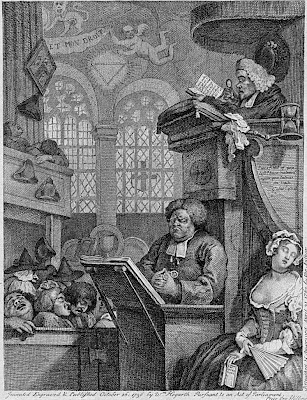