A Rational Collocation of Authors


Next to the spiders I note my main bookcase, a roomy lodging for other things than books. Papers of garden seeds share a shelf with broken-down fishing-tackle; an ancient hortus-siccus lies in company with candle-snuffers and a mole-trap. The books are, I reflect, as I look at the somewhat ragged array of backs, mostly of the old world; cracked calf and warped vellum outnumber the cloth-gilt moderns; "Esmond" in an early edition is, I think, my nearest point to modern romance; my science stops at the earlier Darwin. Being once scolded by Mrs. Kitty because I had not read a serious novel of last week, I explained that I had thought I ought to begin at the beginning of literature, and work downwards in order to the moderns. "Well, and where did you begin? and where have you got to now?" says the Censor; and I tell her that I began at Eutropius as quite a small boy and am now got somewhere about the Elizabethans.

Even amongst my ancients there are odd gaps; I entertain only personal friends, whether amid the Heliconian top shelf of Venetian and Dutch editions, or the dictionaries that repose on the floor. I like even a lexicon to have a character of its own; my commentaries are chosen more for the humours of the commentator than their bearing on the text. I mostly dispense, spite of the several deductions possible from the fact, with those works without which no gentleman's library is complete. Order and rank on the shelves go mainly by inward character; some volumes seem to have an almost spontaneous way of sorting themselves. Bernardino Daniello's Dante constantly finds its way from its fellows, the Convito and Petrarch, to stand beside Conington's Æneid; and more than once I have found a stout Rasselas with plates pinning a shabby paper Candide against the partition. The Iliad and the Republic are generally separated by a Chase's Ethics; and I always humour and encourage this rational collocation of authors. 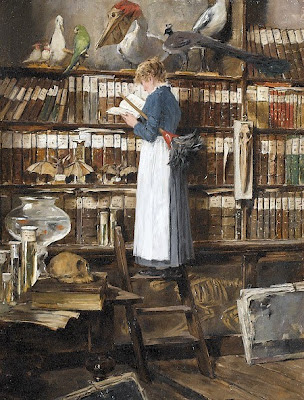