I don't fully understand Hertzberg's joke. "Ayn R." is obvious. It stands for Ayn Rand, copies of whose Atlas Shrugged Paul Ryan used to give to his staff as Christmas presents. Ryan told the Atlas Society in 2005, "The reason I got involved in public service, by and large, if I had to credit one thinker, one person, it would be Ayn Rand.” But what does Romney's anagram "R-Money" mean? Is it supposed to recall the ungrammatical store name Toys R Us? Is it shorthand for "We are money"? 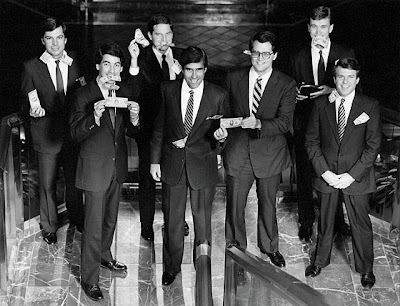 We are money? Mitt Romney and his Bain Capital colleagues

When Aristodemus told the Spartans,
'Money makes the Man', he didn't
miss the mark: a pauper never meets
with honour or with noble treatment.


"Money, money makes the man,"
said he who lost his possessions and his friends as well.

Burnett and Race both use the English proverb "Money makes the man" to translate the Greek, but in χρήματ' ἀνήρ I think we have an example of omission of the copula. See B.L. Gildersleeve, Syntax of Classical Greek § 83:


The forms ἐστί and εἰσί of the copula are omitted in saws and proverbs, in short statements and questions, rapid transitions, abstract expressions.

So χρήματ᾽ ἀνήρ means, literally, either "Money is man" or "Man is money".

I can't think of any classical examples of men literally transformed into money or vice versa, but Zeus turned himself into gold and visited Danae in this form. From their union the hero Perseus was born.

We do see the metamorphosis of money into man and vice versa in Thomas Hood's comic poem Miss Kilmansegg and Her Precious Leg: A Golden Legend. Here is Kilmansegg père (lines 317-323):


He had roll'd in money like pigs in mud,
Till it seem'd to have enter'd into his blood
By some occult projection:
And his cheeks, instead of a healthy hue,
As yellow as any guinea grew,
Making the common phrase seem true
About a rich complexion.

Like father, like daughter. When Miss Kilmansegg's leg had to be amputated after an accident, she was fitted with a golden replacement. She later dreamed that her entire body became gold (lines 1377-1384):


Gold, still gold—and true to the mould!
In the very scheme of her dream it told;
For, by magical transmutation,
From her Leg through her body it seem'd to go,
Till, gold above, and gold below,
She was gold, all gold, from her little gold toe
To her organ of Veneration!