George Washington and the Cherry Tree

That edition is unavailable to me, but here is the story from M.L. Weems, The Life of George Washington; With Curious Anecdotes, Equally Honourable to Himself, and Exemplary to His Young Countrymen (Philadephia: J.B. Lippincott & Co., 1858), pp. 15-16:


The following anecdote is a case in point. It is too valuable to be lost, and too true to be doubted; for it was communicated to me by the same excellent lady to whom I am indebted for the last.

"When George," said she, "was about six years old, he was made the wealthy master of a hatchet! of which, like most little boys, he was immoderately fond, and was constantly going about chopping everything that came in his way. One day, in the garden, where he often amused himself hacking his mother's pea-sticks, he unluckily tried the edge of his hatchet on the body of a beautiful young English cherry-tree, which he barked so terribly, that I don't believe the tree ever got the better of it. The next morning the old gentleman, finding out what had befallen his tree, which, by the by, was a great favourite, came into the house; and with much warmth asked for the mischievous author, declaring at the same time, that he would not have taken five guineas for his tree. Nobody could tell him any thing about it. Presently George and his hatchet made their appearance. "George," said his father, "do you know who killed that beautiful little cherry tree yonder in the garden?" This was a tough question; and George staggered under it for a moment; but quickly recovered himself: and looking at his father, with the sweet face of youth brightened with the inexpressible charm of all-conquering truth, he bravely cried out, "I can't tell a lie, Pa; you know I can't tell a lie. I did cut it with my hatchet."—Run to my arms, you dearest boy, cried his father in transports, run to my arms; glad am I, George, that you killed my tree; for you have paid me for it a thousand fold. Such an act of heroism in my son is more worth than a thousand trees, though blossomed with silver, and their fruits of purest gold."


The Love of Truth
Mark the Boy

At six years old, George,* full of boyish tricks,
Would often please himself by chopping sticks.
A friend, who witnessed oft his fav'rite sport,
Once bought a hatchet of the smaller sort,
And made a present to the darling boy.
The welcome treasure filled his heart with joy:
With eager speed he hasted to the court,
Where faggot piles afforded harmless sport;
But wishing soon new fields of enterprize,
The high wall'd garden next the adventurer tries.
There, thoughtless running down the gravel walks,
The heads of flowers he sever'd from their stalks.
This error would not much have signified,
Had not the hatchet's keenest edge been tried
Upon a favorite tree. Oh! fatal touch!
It bore an English cherry, valued much.
Dearly 'twas purchased, newly planted there,
To thrive for many a distant livelong year.
George left, perhaps unconscious of the wound,
Or else for string to tie the pieces round.
Soon after this, his Father passing by,
The shiver'd trunk directly caught his eye.
Quick rose vexation and regret to see
The hopeless ruin of his fav'rite tree;
Back to the house with hasty steps he ran,
The gard'ner question'd asked each maid and man,
But could no tidings gain; all, all said, "No!"
And sad suspense was left awhile to grow.
Just then the little fellow met his sire:
"O!" he exclaim'd "It is my great desire
To find the person who hath killed the tree
That yonder stands: come down with me and see."
The weapon of the deed by George was borne;
The father's heart was now with anguish torn.
He felt affection, for he loved his child—
Dreaded to chide—of disposition mild.
The real culprit, now so very near,
One moment thought, but shew'd no sign of fear.
His little heart with principle beat high:
"Papa, I cannot, will not tell a lie!
My sharp, bright hatchet gave the naughty stroke."
The parent then with love and rapture spoke,
"Run to my open arms, my dearest boy;
Your love of truth bespeaks a father's joy;
My sudden anger and my grief are fled,
Although my lovely cherry-tree is dead."

Most scholars who have studied the question agree that the tale of George Washington and the cherry tree, intended to teach the virtue of truthfulness, is itself a fabrication cooked up by the less than truthful Parson Weems. Norris wrote:


There is no direct evidence in favor of the authenticity of these anecdotes. Weems, indeed, knew many intimate friends of Washington, but that he should have, as he says, kept the stories secret for twenty years is incredible. A better explanation has come to me from a grandson of Weems. who had it from his father. It is that the whole thing was suggested by a similar occurrence to Weems's eldest son, who was born in 1799. He cut down a Pride of China and confessed, but, sad to say, according to my informer, he received not blessings, but a sound thrashing.

I don't know if anyone else has pointed it out, but there is a slight problem with the family tradition recounted by Parson Weem's grandson. "Pride of China" is a common name applied to species of the genus Koelreuteria, a type of tree from the Far East. Thomas Jefferson apparently was the first to grow Koelreuteria in the United States, from seed given to him by Madame de Tessé, as recorded in his garden book on October 6, 1809:

See Thomas Jefferson's Garden Book, ed. Edwin Morris Betts (Philadelphia: The American Philosophical Society, 1944; rpt. Charlottesville: Thomas Jefferson Memorial Foundation, 1999), p. 387 and n. 25 on p. 398. If Koelreuteria didn't exist in the United States until 1809, then Parson Weem's son could not have cut down a Pride of China in or before 1806 (date of the fifth edition of Weem's biography of Washington, in which the cherry tree story first appears).

The first artistic representation of the cherry tree story is on the kerchief mentioned earlier: 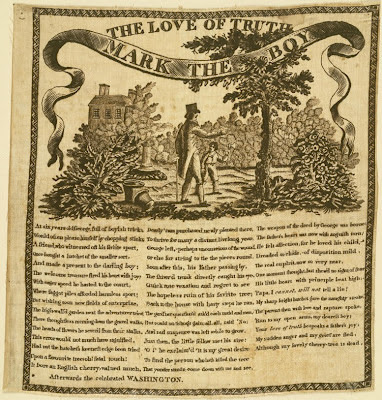 In 1867 John C. McRae made and put on sale the following engraving: 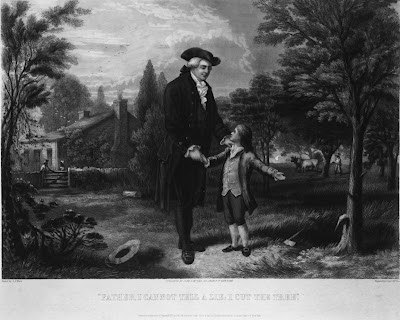 The McRae engraving is said to be "after a painting by G.G. White," i.e. George Gorgas White (died 1898). I don't know if White's painting survives. 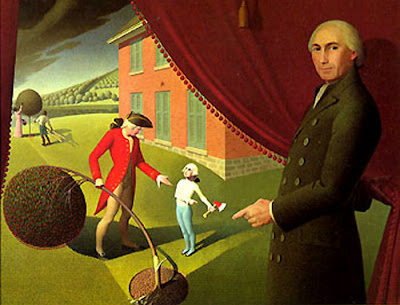