Walter Scott, a pious man, quite unlike Buchan's grim borderer Jobson, quotes 'factura nepotibus umbram' in his letters when he's laying out in his mind his Abbotsford estate.


Next year I can hardly offer you hospitality as I am about to leave this place which has been for seven years my palace of indolence. The situation to which I shall remove next season is much less romantic but as Touchstone says of Audrey it is a poor thing but mine own. It consists of a haugh & brae of about 100 acres stretching along the Tweed for three quarters of a mile, commanding a fine sweep of the river and embosomed in fancy's eye with wood but to the visual orb presenting nothing more lofty or more verdant than some special turnips. Meanwhile great part of my future groves factura nepotibus umbram are travelling quietly in the shape of acorns from Trentham to London by the benevolence of our kind Marchioness.


I have myself made a considerable extrication of funds which were inconveniently and precariously situated during the hours of difficulty and laid them out in terra firma which if it produces as yet no great revenue affords me an infinity of amusement in the way of planting, altering, enclosing, and so forth. You who live in a land of romance would laugh at my efforts to introduce into a barren waste beauties which I myself shall not live to see but I trust Posterity on whom we rest our hopes of fame will do justice to the man who planted a million of trees on a naked heath.


A tree that springs from dropped seed
Grows slowly, it'll give shade one day to your descendants. 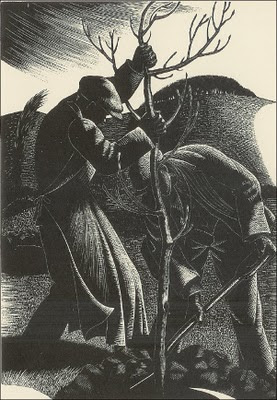