The Toper and the Flies

Thanks to Ian Jackson for tracking down the probable source of Peter Pindar's verses about the toper who removed flies from the shared punch bowl and then put them back in after taking a drink. The story appears in Ottmarus Luscinius (1487-1536), Ioci ac Sales Mire Festivi (1524), no. CLXVIIII. Latin text and English translation are in One Hundred Renaissance Jokes: An Anthology, ed. Barbara C. Bowen (Birmingham: Summa Publications, Inc., 1988), pp. 61-62 (joke no. 66):

A man, drinking a toast at a dinner with friends, took out the flies which had happened to fall into the cup, and, after he had drunk, dropped them back into the wine, which seriously annoyed the other guests. "I hate flies in cups," he said, "but it might happen that you find such seasoning very agreeable." There is an epigram by Sir Thomas More about this joke:


The guest took the flies out of the wine-cup
Before he drank, and put them back as he drank.
He gave this reason: "I do not like flies,
But I don't know, maybe one of you might."6

6 Is this the first "Waiter-there's-a-fly-in-my-soup" joke? Luscinius quotes More's epigram 115 ("Ridiculum in ministrum") correctly, except for the punctuation: there should not be a period at the end of the first line.

Here is an image of the joke in Luscinius' book: 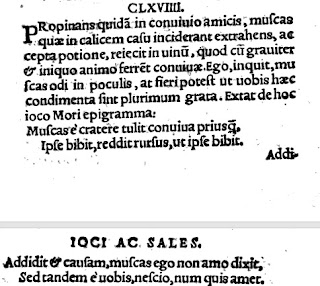 
A certaine conceyted Traueller being at a Banquet, where chanced a flye to fall into his cuppe, which hee (being to drinke) tooke out for himselfe, and afterwards put in againe for his fellow: being demanded his reason, answered, that for his owne part he affected them not, but it might be some other did.

There is extant to this Ieast, an Epigram of Syr Thomas Moores, which I haue here inserted, as followeth:


Which I English thus:—

Out of his Glasse, one tooke a Flye,
In earnest or in ieast
I cannot tell; but hauing drunke,
Return'd it to the rest.

And for hee would offencelesse seeme,
Hee shewed his reason too:
Although I loue them not my selfe,
It may bee some heere doo.

Charles Mackay, in Dickens' All the Year Round No. 454 (January 4, 1686) 89, called the house-fly a "veritable dipsomaniac," and the problem of flies in the wine seems to be a perennial one. See Tom Standage, A History of the World in 6 Glasses (New York: Walker & Company, 2006), p. 45, where there is an illustration of "Ashurnasirpal II seated in state, holding a shallow wine bowl. Attendants on either side hold flyswatters to keep flies away from the king and his wine": 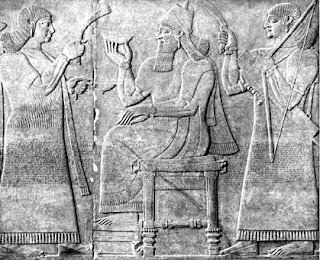