'Kayf' sent me to biographies of Burton and also by chance to his burial wishes. As this has been a recent thread on the blog, here they are — bizarrely fulfilled, as fate would have it.


During one of their daily walks along the 'Largo del Promontorie' in front of their house [in Trieste], the couple visited the grave of Richard's predecessor, Charles Lever, in the Protestant burial ground. Some months earlier Richard had told the Protestant chaplain – in the presence of of the Vice-Consul, P.P Cautley – that he was an atheist. However, he said, he had been brought up in the Church of England, 'and that is now officially my church.' Cautley thought Burton might have said this to shock the clergyman rather than make a declaration of faith. But Richard knew that in the absence of a positive declaration to the contrary, in the event of his death he would be considered as an Anglican. Lever's grave was situated in a damp and melancholy corner which habitually collected bits of paper and rubbish blown in by the wind. Isabel recalled that Richard had shuddered as he looked at Lever's grave, and said to her. 'If I die here, don't bury me there. They will insist ... will you be strong and fight against it?' When she asked where he wanted to be buried he said he would prefer a burial at sea, for he hated the idea of being underground. Regarding cremation, she said, 'He made his usual joke at a serious thing, "I do not want to burn before I've got to."' Isabel told him she would not be unable to cope with a burial at sea and asked, '"Won't anything else do?'" "Yes," he said, "I should like us to lie in a tent, side by side."' She let the matter rest here.


She [Isabel] was desperately anxious to accede to the wishes Richard had expressed during their walk a few months earlier; 'he hated darkness so much that he would never have the blind down lest he might lose a glimpse of light from twilight to dawn.' But she could not think how to enable them to lie 'side by side in a tent' until she thought of the Taj Mahal and conceived the idea of a small mausoleum. She would build 'an Arab tent ... made of dark Forest of Dean stone and white Carrara marble, where filtered light could be admitted and where Richard's coffin could lie above ground on a bier. Her letter in November to Messrs Dyke, Stonemasons of Highgate, commissioned a structure based on the tent the Burtons had used in Syria. It was not – as some have written – a Bedouin tent (i.e. the low black traditional tent of the desert) but a tall white structure, designed by Richard and made in Damascus, in which he was not obliged to stoop and which they used on his many journeys.

Only the most determined taphophile would traipse down to Mortlake (SW14) to visit the tomb, but I hope to one day. In view of his widow's cremation of his unpublished papers, there's a rather cruel irony in Burton's "I do not want to burn before I've got to." 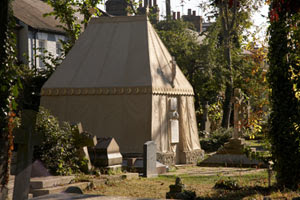 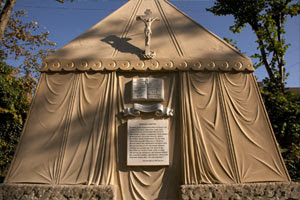