They turned their attention to a certain one of the trees in their vicinity, called "lotos," naturally beautiful to look at and flourishing in its condition. Enchanted beyond measure in their silly minds and overcome by its beauty, they considered it a god and thought it should be propitiated with priests and sacrifices.


This is full of much foolishness and excessive obtuseness, to devote oneself to a little, weak, absolutely senseless tree and to offer worship to it as to God.


Therefore, if you place any trust in me, citizens, if you care at all about your own salvation, cut down this tree and throw it into the fire...


Previously, as has been said, he persisted with his words, but when he could not restrain them from this error, next he shows the power that lies in deeds. Girding the loins of his mind and drawing power from Jesus Christ in prayer, he takes a sharp axe in his hand and, at noon in summer, unseen by anyone, he chops the tree of error down root and branch.


The priests came to make their customary sacrifice to the tree. When they saw that it had been cut down and was shamefully broken to pieces down to the ground, they were at first stunned, naturally overcome by great amazement.


First they considered who could be responsible for this disaster. Then they gradually called to mind the admonitions of Hyacinth. They understood that the deed could be attributed to no one else except the one who loathed the communal sacrifice as accursed and who repeatedly criticized and tried to hinder those who offered it. With one impulse they attacked him....Leaping on him with kicks and punches, they dragged him by the hair; they pulled him this way and that on the ground, striking him with sticks and pelting him with stones. Having tortured him thus in all kinds of ways, they brought him before the leader of the city.


When the leader heard these words, first he ordered Hyacinth to be stretched out on the ground and beaten with rods. For a long time his flesh was mangled and his bones were pounded. He moistened the ground with his blood. He uttered no sound. In silence he was transported to Lord Jesus. Praying to Him with soundless pleas and supplications, he easily endured the torture. The crowd kept shouting, "Leader, call the executioner, call the one who'll pull his teeth out. In the same way that he cut down our god, let his teeth be cut out, let them be dug out by the roots with iron pincers." As this deadly sentence was carried out on him, the maddened crowds still didn't let go of their insanity. They shouted at him as he was bound again like a bundle of faggots*, rent asunder, pulled along the ground, and dragged out of the city to be stabbed with sharp reeds and pelted with rocks. When all the murderous attack on him and punishment had reached its end, and they had tortured him so pitilessly, they dragged him up to the top of a mountain. Having made him a single wound from head to foot and having put him to death, as evening had already arrived, they left his body as food for wild beasts.

* I translated τρόπον δένδρου κοπίντος as "like a bundle of faggots," but perhaps the phrase refers to a rope around a felled tree. 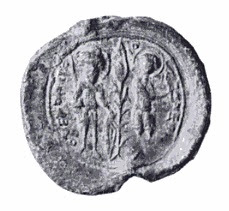 The seal is described as follows by Nicolas Oikonomides, A Collection of Dated Byzantine Lead Seals (Washington: Dumbarton Oaks Research Library and Collection, 1986), pp. 119-120 (seal no. 126):


St. Theodore (at left) and St. Hyakinthos standing. St. Theodore holds an inclined spear (right hand) and a shield, both resting on the ground. In the center there is an (elm) tree. St. Hyakinthos, beardless, swings an ax with both hands to fell the tree....This image seems to have a Paphlagonian source of inspiration since it depicts St. Theodore and, especially, St. Hyakinthos of Amastris, who is not a very commonly represented saint and who suffered martyrdom for cutting down an elm tree venerated by the pagans (18 July).

St. Hyacinth lived in the fourth century, his encomiast Nicetas Paphlagon in the ninth.