I have seen many computations respecting the greatest amount of erudition attainable by an individual in his life-time; but these computations are falsely based, and fall infinitely beneath the truth. It is true that, in general, we retain, we remember to available purpose, scarcely one-hundredth part of what we read; yet there are minds which not only retain all receipts, but keep them at compound interest forever. Again:—were every man supposed to read out, he could read, of course, very little, even in half a century; for, in such case, each individual word must be dwelt upon in some degree. But, in reading to ourselves, at the ordinary rate of what is called "light reading," we scarcely touch one word in ten. And, even physically considered, knowledge breeds knowledge, as gold gold; for he who reads really much, finds his capacity to read increase in geometrical ratio. The helluo librorum will but glance at the page which detains the ordinary reader some minutes; and the difference in the absolute reading (its uses considered), will be in favor of the helluo, who will have winnowed the matter of which the tyro mumbled both the seeds and the chaff. A deep-rooted and strictly continuous habit of reading will, with certain classes of intellect, result in an instinctive and seemingly magnetic appreciation of a thing written; and now the student reads by pages just as other men by words. Long years to come, with a careful analysis of the mental process, may even render this species of appreciation a common thing. It may be taught in the schools of our descendants of the tenth or twentieth generation. It may become the method of the mob of the eleventh or twenty-first. And should these matters come to pass—as they will—there will be in them no more legitimate cause for wonder than there is, to-day, in the marvel that, syllable by syllable, men comprehend what, letter by letter, I now trace upon this page.

When I was a young boy in school, speed reading was a popular educational fad. President Kennedy was one of its most enthusiastic advocates. We were actually taught, in a systematic way, techniques for reading as rapidly as possible. Fortunately, I've forgotten most of what I learned. Reading quickly is like bolting your food. You can't appreciate or savor what you gulp down in a hurry.

In the preface to Daybreak (Morgenröte, tr. R.J. Hollingdale), Nietzsche says that the essence of philology is reading slowly:


It is not for nothing that I have been a philologist, perhaps I am a philologist still, that is to say, a teacher of slow reading....For philology is that venerable art which demands of its votaries one thing above all: to go aside, to take time, to become still, to become slow—it is a goldsmith's art and connoisseurship of the word which has nothing but delicate, cautious work to do and achieves nothing if it does not achieve it lento. But for precisely this reason it is more necessary than ever today, by precisely this means does it entice and enchant us the most, in the midst of an age of 'work', that is to say, of hurry, of indecent and perspiring haste, which wants to 'get everything done' at once, including every old or new book:—this art does not so easily get anything done, it teaches to read well, that is to say, to read slowly, deeply, looking cautiously before and aft, with reservations, with doors left open, with delicate eyes and fingers. 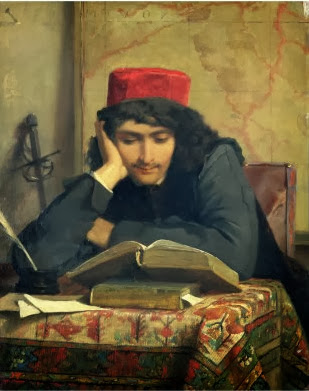 
When we read too quickly or too slowly, we understand nothing.