The Tomb of Flavius Agricola


My home was Tibur; Flavius Agricola I was called. I am the one you can see lying there, just as I used to lie at dinner, carefully looking after myself for all the years Fate allowed me. And I never spared the wine. My darling wife, Flavia Primitiva, died before me, chaste and attentive worshipper of Isis, with whom I spent thirty years of happiness. For consolation, she left me her body's fruit — Aurelius Primitivus, who will tend my grave with piety and will preserve for ever my resting-place. Friends, who read this, heed what I say: mix the wine, bind the garland round your brow, drink far from here. And do not withhold the pleasures of love with beautiful women. When death comes, everything will be consumed by earth and fire.

The inscription is now lost, but the statue is in the Indianapolis Museum of Art, inventory number 1972.148: 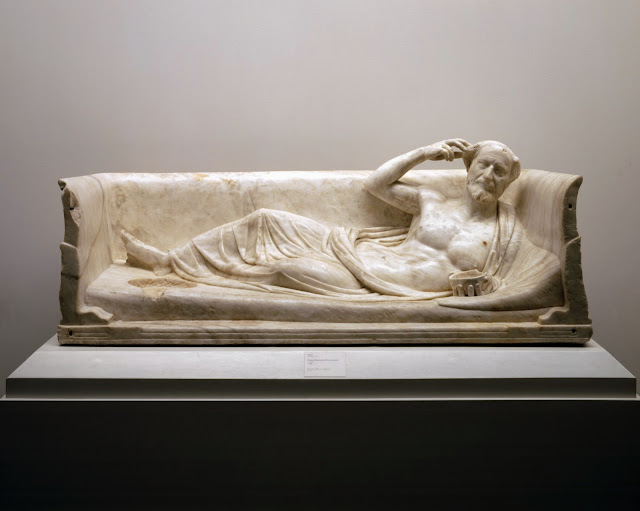 
A statue now in Indianapolis shows a bearded man reclining on a couch, his upper torso bare; in his left hand he holds a drinking cup, his right is raised to the wreath on his head (Fig. 54). The figure acted as a funerary monument, with an opening at the foot of the couch for the urn that held the ashes of the deceased. The identification of the same ﬁgure in a drawing in the collection of Cassiano dal Pozzo now in Windsor Castle revealed its history; it was discovered in Rome in 1626, in excavations beneath St. Peter's, in what we now call the Vatican Necropolis, when the foundations were being laid for Bernini's baldacchino. For those who were hoping to ﬁnd the tomb of St. Peter, our man was a grave disappointment; even more shocking, however, was the inscription originally written on the base of the couch. The dead man, who gives his name as Flavius Agricola from Tibur, speaks in indifferent hexameters: 'I am reclining here, as you see me, just as I did among the living in the years which fate gave me, I nurtured my little soul and wine was never in short supply.' He goes on to speak of his wife of 30 happy years. Flavia Primitiva, who has died ﬁrst, of her pious worship of the goddess Isis and of her beauty, and then apparently of the support of his stepson Aurelius Primitivus. Then he continues (l.12): 'Friends who read this, I advise you, mix up the wine and drink far away, binding your brows with ﬂowers, and do not spurn the pleasures of Venery with beautiful girls; all the rest after death the earth consumes and ﬁre'. This was too much for the Vatican; the Pope, Urban VIII, ordered the inscription first to be plastered over, then the whole base to be destroyed, and threatened with 'the most rigorous excommunication and the most horrible threats' whoever divulged the verses. The statue, minus base, ended up decorating the garden of the Pope's nephew, Cardinal Francesco Barberini, whose attitude toward these matters was very different from that of his papal uncle.

I guess I have incurred excommunication by divulging the verses.