J.D. Beazley (1885-1970), "Geras," Bulletin van de Vereeniging tot Bevordering der Kennis van de Antieke Beschaving te 's-Gravenhade 24-26 (1949-1951) 18-20, discusses some Greek vases depicting "Herakles quelling Geras, Old Age," one myth among many in which "the hero overcomes death and wins immortal life." According to Bessie Ellen Richardson, Old Age among the Ancient Greeks: The Greek Portrayal of Old Age in Literature, Art, and Inscriptions with a Study of the Duration of Life among the Ancient Greeks on the Basis of Inscriptional Evidence (Baltimore: The Johns Hopkins Press 1933), pp. 72-76 (at 73), this particular myth "is wholly forgotten in literature," although Beazley thinks that "Euripides may have had it in mind when he wrote his famous chorus 'Old Age and Youth', in his Hercules Furens," i.e. Euripides, Heracles 637-700 (comparison of youth with old age in the first strophe, lines 637-654).


On the obverse, Herakles, who wears a leather corslet as well as the lionskin, and has his quiver at his flank, holds his club in his right hand (the club passes on the hither side of the quiver and corslet) and with his left hand grasps the right arm of Geras, who flees, looking round, with his mouth open, and his right arm extended in entreaty. He holds a crooked stick, and a himation hangs loose from his right arm. He is lean, has a hooked nose, and a large penis of unattractive shape—an important feature which confirms the interpretation as Geras. 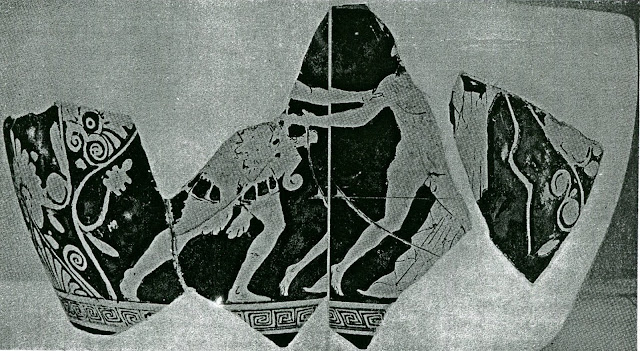 
The group of Herakles and Geras is flanked by two onlookers, women, who can scarcely be named. Herakles strides to right and seizes his adversary by the scruff. Geras, turned to left, is a puny naked creature, hairless, with gaping toothless mouth and large pudenda; he bends nearly double under the attack and stretches out his arms, one up, one down. 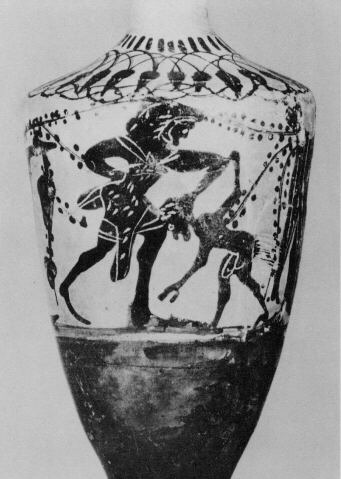 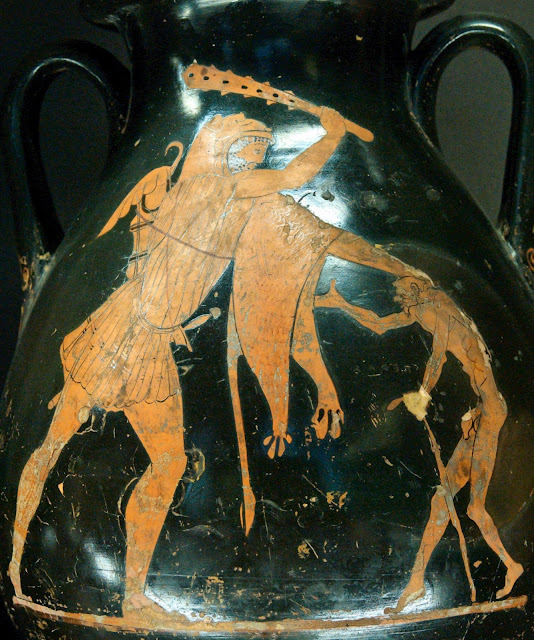 
Herakles, dressed in chitoniskos and belted lionskin, his sword in its scabbard at his flank, his right arm akimbo, leans on his club, which rests on a rock. Geras supports himself on a crooked stick, with his garment rolled up under his right armpit. He looks up at Herakles and extends his right arm with an animated gesture. He is much more strongly characterized than the Geras of the Penthesilea Painter: small, bald, with a short white beard, hooked nose, receding chin, thin neck with jutting Adam's apple, broken back, emaciated legs, large realistic genitals. 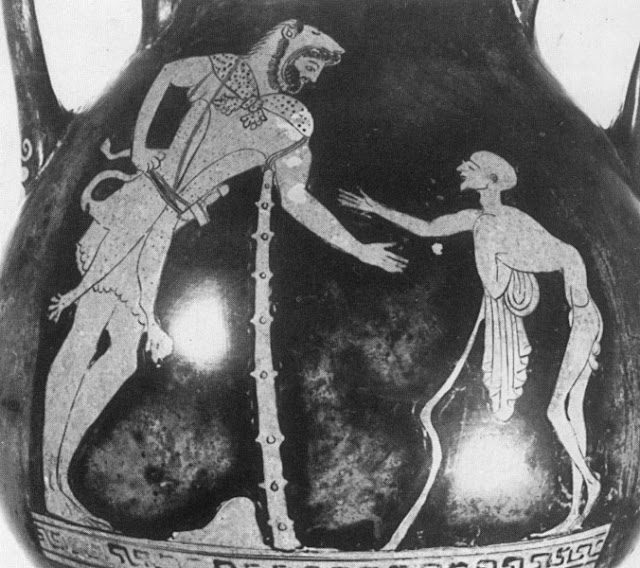 Why is Old Age depicted with large, misshapen genitals? At first I thought it might represent the bulge of an inguinal hernia. But H.A. Shapiro, "Notes on Greek Dwarfs," American Journal of Archaeology 88.3 (July, 1984) 391-392, has a different theory. He first cites two sources testifying to the ancient belief that dwarfs had enlarged genitals. These sources are:
Shapiro then connects these well-endowed dwarfs with depictions of Old Age (at 391; footnotes omitted):


Although the dwarf with large phallus appears rarely in pre-Hellenistic Greek art, the tradition may help explain a puzzling feature of several Attic vase-representations of Old Age (Geras). Of five known vases depicting the encounter of Herakles and Geras, a story not found in any literary version, three show Geras as a very small creature, dwarfed by the hero, while on the other two he is of normal size. The three dwarf-like depictions of Geras are not consistent in physiognomy, but they all share one trait: a large and misshapen phallus. That it is misshapen could be a sign of old age, when, according to the poets, the body and limbs become weak and bent. But that the phallus becomes enlarged in old age is not recorded in any ancient source and, on the contrary, we might expect it to become shrivelled, as is often said of an old man's flesh.

Thanks to the ever helpful Ian Jackson, who sent me a copy of Beazley's article.