Variations on a Theme


Macaulay detested the labour of manufacturing Greek and Latin verse in cold blood as an exercise; and his hexameters were never up to the best Etonian mark, nor his iambics to the highest standard of Shrewsbury. He defined a scholar as one who reads Plato with his feet on the fender.


My uncle read Plato in a ponderous folio, sixteen inches long by ten broad, and weighing within half an ounce of twelve pounds; — which was very near the weight of a regulation musket at the period when he himself was Secretary at War. Published at Frankfort in the year 1602, it contained nearly fourteen-hundred closely-printed pages of antique Greek type, bristling with those contractions which are a terror to the luxurious modern scholar. The Latin translation by Marsilius Ficinus, arranged in parallel columns by the side of the original text, presents an aspect of positively revolting dullness.


Jowett defined a scholar as a man who read Thucydides with his feet on the mantelpiece; by that test he was a scholar, scarcely by any other.

One can easily imagine reading with one's feet on the fender, defined by the Oxford English Dictionary, sense 3.a, as "A metal frame placed in front of a fire to keep falling coals from rolling out into the room," but it's harder to imagine reading with one's feet on the mantelpiece, which is usually several feet above the floor. The same dictionary does, however, define a mantelpiece as "An ornamental structure of wood, marble, etc., above and around a fireplace; the manteltree of a fireplace together with its supports" (emphasis added). Perhaps the scholar's feet were pressed against the side supports. For the mantelpiece in this connection see also John Buchan (1875-1940), The Island of Sheep (1936), Chapter VI:


I found Macgillivray reading Greek with his feet on the mantelpiece and the fire out. He was a bit of a scholar and kept up his classics.

I can't find any other attribution of the remark to Benjamin Jowett (1817-1893), but a couple of versions mention Thucydides in place of Plato.


Carlyle was an illustration of Dugald Stewart's notion that "Greek had never crossed the Tweed in great force." He stated in the Reminiscences that his young pupil Charles Buller knew far more of that language than himself; it need hardly be said that his tastes never set strongly toward the ancients. I asked him if he ever looked into the classics, and he said that he was reading Thucydides, but that he stuck to the narrative. The speeches might be all very fine, but they bored him; and then they were as hard as the very deuce. He heard with satisfaction that the learned Madvig had told me in Copenhagen that, in his belief, Epaminondas or Alexander the Great would have found the said speeches hard nuts to crack: they were too involved and affected in style, and to a certain extent in the thoughts, for an average Greek to have read them, as Macaulay put it, with the feet on the fender.


As for us, we were suckled on Plato,
And yearned, in our cots as we lay, to
Expound that philosopher's meaning.
Can any revere him as we do—
We, fed, and fed full on the Phaedo
And Gorgias, up to our weaning?

For whence comes our feeling for beauty
Our sense of religion and duty?
To him, next to Scripture, we owe it.
That sage, whom for years the most tender,
We sat "with our feet on the fender"
And read—in the version of Jowett.

The Maclise Portrait-Gallery of "Illustrious Literary Characters" with Memoirs Biographical, Critical, Bibliographical & Anecdotal Illustrative of the Literature of the Former Half of the Present Century by William Bates, new ed. (London: Chatto & Windus, 1891), opposite p. 7 (No. III = John Gibson Lockhart, The Editor of the Quarterly): 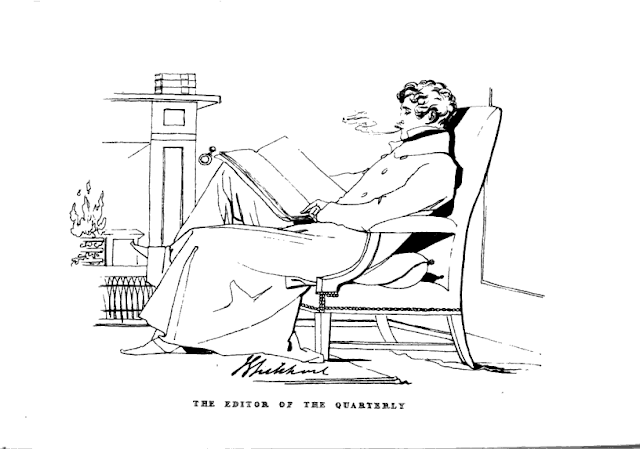