A Herm in the House of Caecilius Jucundus


In the atrium of the house, two squared pillars (or herms) were found, of a type commonly used in the Roman world to support marble or bronze portrait heads. In the case of male portraits, genitals would be attached half way down the herm, making what is, to be honest, a rather odd ensemble. On one of these pillars genitals and bronze head survived — a highly individualised portrait of a man, with thinning hair and a prominent wart on his left cheek (Ill. 68). Both pillars carry exactly the same inscription: 'Felix, ex-slave, set this up to the our Lucius'.

There is obviously something amiss with "the our Lucius". The inscription (Corpus Inscriptionum Latinarum X 860) reads

and should be translated


Felix, ex-slave, set this up to the genius of our Lucius.


The male spirit of a gens existing during his lifetime in the head of the family, and subsequently in the divine or spiritual part of each individual. 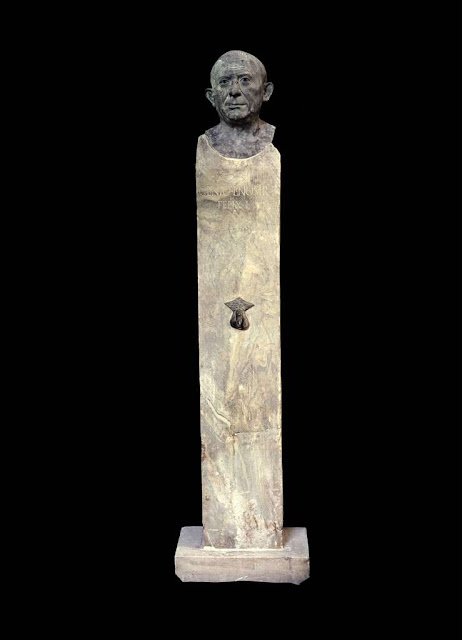 
At one point, in the middle of a marital row, Trimalchio takes a barbed potshot at his wife's lowly origins: 'If you're borne on a mezzanine, you don't sleep in a house.'