Apollinaris, doctor of emperor Titus, has had a good shit here.
(CIL IV 10619)

This graffito appears on the wall of a latrine in the 'House of the Gem', Ins[ula] Or[ientalis] I.1, Herculaneum.


What did the residents of Pompeii and Herculaneum, whose modest public facilities we have surveyed above, write on the walls of their latrines? Perhaps the most cited and surely one of the more apparently honest remarks is that of Apollinaris, a doctor of the emperor Titus, who wrote the following upon a visit to Herculaneum: APOLLINARIS. MEDICUS. TITI IMP. HIC. CACAVIT. BENE: "Apollinaris, doctor of the emperor Titus, crapped well here."63 Rather than accepting the text at face value, I think it more likely that it was written as a joke.

Antonio Varone, "Newly Discovered and Corrected Readings of iscrizioni 'privatissime' from the Vesuvian Region," in Rebecca Benefiel and Peter Keegan, edd., Inscriptions in the Private Sphere in the Greco-Roman World (Leiden: Brill, 2016), pp. 113-130 (at 119-120):


I note in this regard the rather formal message left in a refined style of handwriting, which one might call almost pompous, by none other than a famous doctor to his own contemporaries (and inadvertently to posterity) in the latrine of the luxurious Casa della Gemma in Herculaneum (Ins. Orientalis I, nr. 1), where he was likely a guest:18

The attention to defecation that is registered by the graffiti certainly is surprising, characterizing with crisp immediacy an entire scenario, as if giving us the cadence of a daily sigh of the society at that time.

In other words, like "Washington slept here," Apollinaris shat here.

Thanks to Eric Thomson for pictures of the graffito and the latrine from Andrew Wallace-Hadrill, Herculaneum: Past and Future (London: Francis Lincoln, 2011) p. 294: 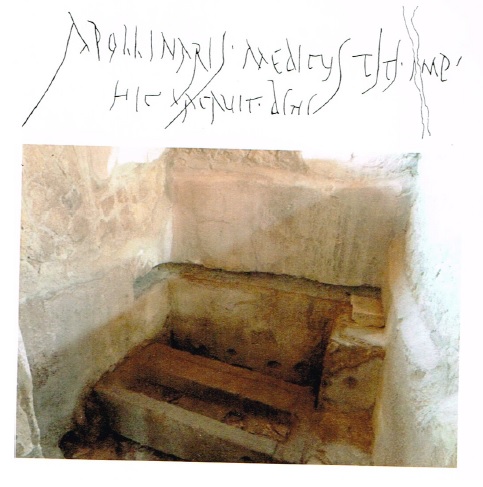