A friend sent me the following photograph of the brass memorial plaque in honor of A.E. Housman in the Chapel of Trinity College, Cambridge. 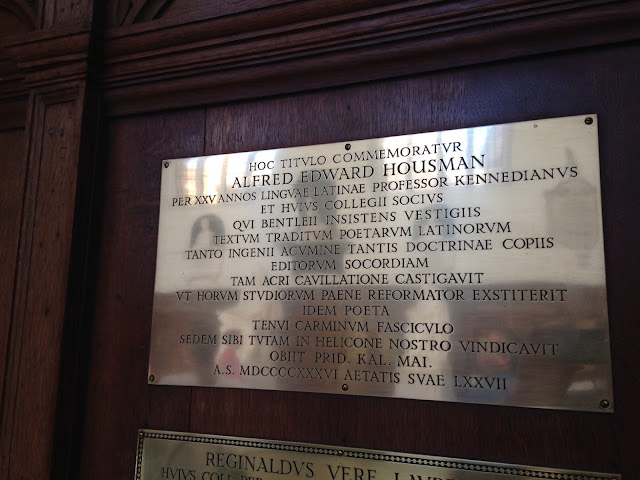 Here is a transcription of the plaque:

The transcription at the Chapel's web site (http://trinitycollegechapel.com/about/memorials/brasses/housman/) is incorrect in one letter. It transcribes Housman's name as HOVSMAN, but from the photograph it is clear that the name is spelled with a rounded U, not a V. Here is a translation, from the same web page:


This inscription commemorates Alfred Edward Housman, who was for twenty-five years Kennedy Professor of Latin and Fellow of the College. Following in Bentley's footsteps he corrected the transmitted text of the Latin poets with so keen an intelligence and so ample a stock of learning, and chastised the sloth of editors so sharply and wittily, that he takes his place as the virtual second founder of textual studies. He was also a poet whose slim volumes of verse assured him of a secure place on the British Helicon. He died on 30th April 1936 at the age of seventy-six.

I haven't seen Inscriptions from the Chapel of Trinity College, Cambridge. Transcribed and Translated by James Clackson (Cambridge, 1990).


I have a copy of Clackson's book on the Trinity inscriptions. Your online source is simply a transcription of his 1990 text and translation, including the erroneous V (p. 98).