Samuel Whelpley (1766-1817), An Historical Compend: Containing a Brief Survey of the Great Line of History from the Earliest Times to the Present Day; Together with a General View of the Present State of the World, with Respect to Civilization, Religion, and Government; and a Brief Dissertation on the Importance of Historical Knowledge, Vol. II (Morris-Town: Henry P. Russell, 1807), pp. 164-165 (ellipsis marks in original):


The new world has been peculiarly unfortunate, in all respects, as it relates to the matter of a name. In the first place, it should have been called Columbia — a name which yields to none in point of dignity, harmony, and convenience. The word Columbia, in its very sound, is grave, and proper for history....it is dignified and adapted to oratory....it is full, smooth, and harmonious, and is unrivalled in poetry. In its very orthography, it is perfectly neat, convenient, and agreeable....neither too short nor too long.

That the new continent should be called America, after Americus Vesputius, was the greatest act of folly, caprice, cruelty, and injustice of the kind, that ever mankind were guilty of. To deprive Columbus of that honor which he so justly merited — to bestow it upon one who had no sort of title to it — to violate at once justice, propriety, and harmony, by rejecting a name which that of no nation ever excelled, and substituting a name which sounds but indifferently in prose, and is absolutely intolerable in every possible species of poetry, is an enormity of caprice and folly which cannot be thought of with any degree of patience. It will forever be regretted by every reflecting mind. Indeed, the name of Columbia will always reign in poetry, and in the pathetic and sublime of prose. It will probably gain ground upon its spurious, upstart rival, and it may in a good measure supplant it.


It saddens Norwegians that America still honors the Italian Columbus, who arrived late in the New World and by accident, who wasn't even interested in New Worlds but only in spices. Out on a spin in search of curry powder and hot peppers — a man on a voyage to the grocery — he stumbled onto the land of heroic Vikings and proceeded to get the credit for it. And then to name it America after Amerigo Vespucci, an Italian who never saw the New World but only sat in Italy and drew incredibly inaccurate maps of it. By rights, it should be called Erica, after Eric the Red, who did the work five hundred years earlier. The United States of Erica. Erica the Beautiful. The Erican League.


Turtle Island — the old/new name for the continent, based on many creation myths of the people who have been living here for millenia [sic], and reapplied by some of them to "North America" in recent years. Also, an idea found world-wide, of the earth, or cosmos even, sustained by a great turtle or serpent-of-eternity.

A name: that we may see ourselves more accurately on this continent of watersheds and life-communities — plant zones, physiographic provinces, culture areas; following natural boundaries. The "U.S.A." and its states and counties are arbitrary and inaccurate impositions on what is really here. 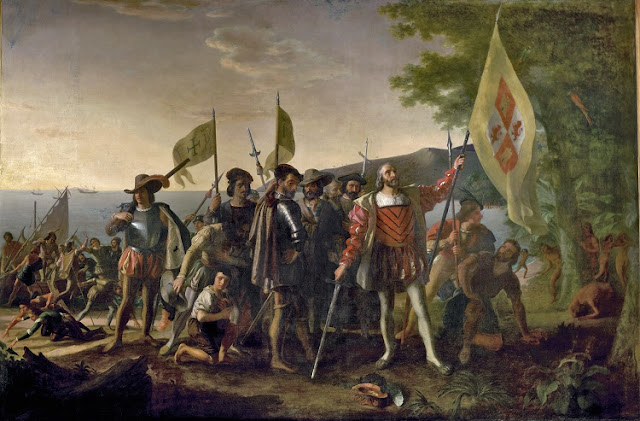