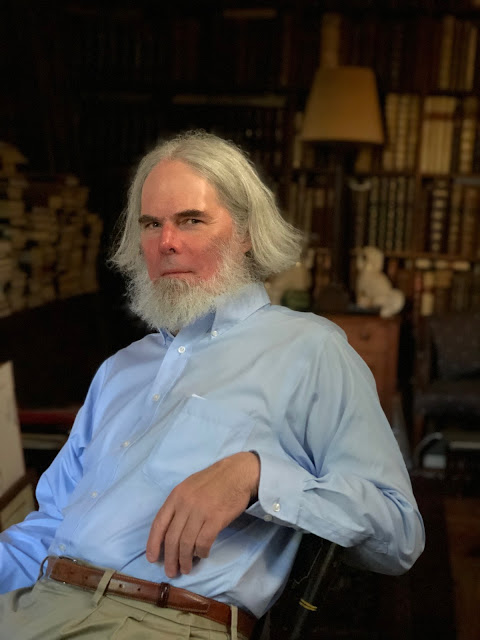 Someone should do for my dear departed friend Ian Jackson, scholar, author, and antiquarian bookseller, what he recently did for one of his friends, namely write a detailed account of his life and achievements — see Bernard M. Rosenthal, 5 May 1920 - 14 January 2017: A Biographical and Bibliographical Account by Ian Jackson in the Style of Pierre Bayle (1646-1706) (Berkeley: The Wednesday Table, 2017). I don't have the knowledge or skill for such a tribute, but now that the initial shock of Ian's passing is starting to wear off, it would be disloyal and ungrateful of me not to say a few words, however inadequate, about this remarkable man. I was going to wait until his obituary appeared in the newspaper before writing anything, but news of his tragic and untimely death has by now already appeared elsewhere.

Ian first swam into my ken (he would have immediately caught the allusion and, I hope, pardoned the cliché) in June of 2011, when I received in the mail a package from him filled with books, articles (by himself and others), and a charming letter of introduction. It was to be the first of many such packages. Everywhere I turn in my house I see gifts given to me by Ian, from pictures on the walls to books (hundreds of them) on the shelves.

It was also in June of 2011 that the acknowledgement "Hat tip: Ian Jackson" first appeared on this blog. Ian, polymath and polyglot that he was, should have had his own corner of the World Wide Web from which to disseminate witty observations and remarks on his extensive reading, but he chose instead to favor me with much of his Lesefrüchte. I still have boxes of unused material which he sent me, and so "Hat tip: Ian Jackson" will continue to appear in this space, despite his death.

Ian Jackson was born in Montreal, the son of physicist John Jackson and Barbara Cook. He attended the University of California at Santa Cruz, in his words "attracted by the fact that it was then still possible to graduate essentially by reading in the library — with the aid of sympathetic professors, chiefly British expatriates with mere M.A.'s, in the twilight years of that Golden Age before the 'Ph.D. incubus' barred many a delightful eccentric from the academic world." In 1973 he received the degree of B.A. in Classics. That might have been the end of his formal education, but he soon became through self-tuition an immensely erudite independent scholar, spending two or three hours a day reading in local academic libraries (primarily at the University of California at Berkeley and the Graduate Theological Union).

His knowledge of foreign languages and literatures was exceptional. A native Frenchman said of him, "Ian speaks excellent French — the French of the 18th century." Among his many unpublished works is a wonderfully idiomatic translation of Roland Cailleux's La Religion du Coeur (Paris: Bernard Grasset, 1985), in which various minor characters give their version of the Gospel narrative. Ian never studied Italian in school, but picked it up from listening to opera and from his knowledge of other Romance languages. Another unpublished work is Lettres à une Inconnue, an English translation of Leo Spitzer's letters, over a hundred in all, written in Italian to a young woman.

Many of Ian's works appeared in self-published limited editions under the imprint "Ian Jackson Books." With his wife Ann Arnold (artist, book illustrator, and fascinating and attractive figure in her own right), he published such titles as The Chaste Mouse and the Wanton Mouse (Lunenburg: Stinehour Editions, 2016) and Addie & Zika (Berkeley: Ian Jackson Books, 2017). Under the anagrammatic pseudonym Jan Cosinka, he wrote Teach Yourself Malkielese (Berkeley: Ian Jackson, 2006), a study of the idiolect of the Romance philologist Yakov Malkiel. The speech of his own father was the subject of another book, Mathein Pathein: A Thesaurus of the Idiolect of John David Jackson (1925-2016) (Berkeley: Ian Jackson, 2016). His ground-breaking study The Price-Codes of the Book-Trade: A Preliminary Guide (Berkeley: Ian Jackson, 2010) was followed by a 2nd revised and enlarged edition (Narberth: Bruce McKittrick, 2017). These are just a few of his many books.

Ian contributed articles, book reviews, and obituaries (in English, French and Italian) to periodicals such as Landscape, Fine Print, North American Pomona, Garden History, The Bookplate Journal, The Independent, The Book Collector, Bookdealer, Petits Propos Culinaires, Archives of Natural History, Pacific Horticulture, The Papers of the Bibliographical Society of America, Conférence, Belfagor, and Taxon. Just to compile a list of his writings would in itself be a worthy act of pietas, but the materials to do so are currently unavailable to me. I have some of his books, and I have started to make a collection, for my own use, of his Belfagor and Taxon articles from the JSTOR repository.

That such a man chose to make me his friend is a high honor, and I will do my best to perpetuate his memory in whatever small way I can. Although we never met in person (he didn't drive, and I rarely leave home), I have several photographs of Ian. Here he is, surrounded by some of his favorite things, shortly after being diagnosed with the cruel disease which took him away from family and friends much too soon: 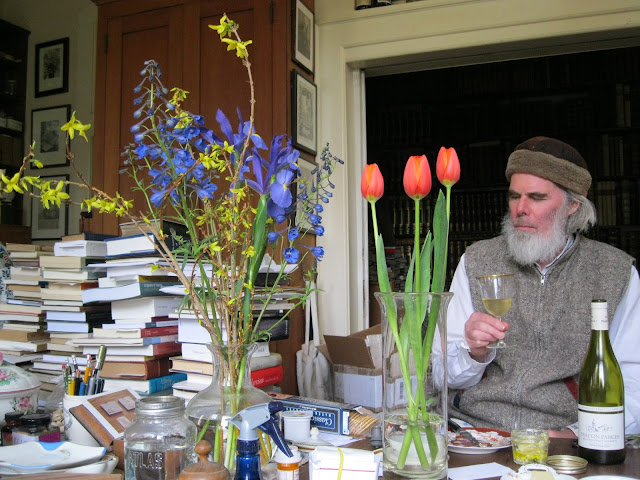 I would be very glad to receive (megilleland AT gmail.com) and perhaps to publish reminiscences from Ian's other friends.