A Catch by Henry Purcell

The Second Book of the Catch Club, or, Merry Companions, being a Choice Collection of the Most Diverting Catches for Three and Four Voices. Compos'd by the late Mr. Henry Purcell, Dr. Blow, &c. (London: I. Walsh, 1690), p. 20 (number 34, for 3 voices): 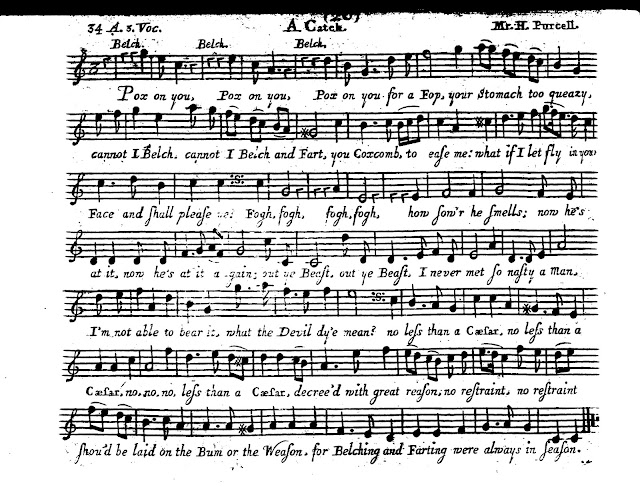 The lyrics transcribed, with capitalization and punctuation preserved:

The direction "Belch" appears above measures 1, 3, and 5. A couple of notes:


He is even said to have thought of an edict allowing the privilege of breaking wind quietly or noisily at table, having learned of a man who ran some risk by restraining himself through modesty.

I don't have access to the updated edition of Purcell's Catches by Ian Spink (London: Novello, 2000) or to Paul Hillier, ed., The Catch Book: 153 Catches Including the Complete Catches of Henry Purcell (Oxford: Oxford University Press, 1987).