Men That Are Fat


But alas! unlike Media and Taji, Borabolla, though a crowned king, was accounted no demi-god; his obesity excluding him from that honor. Indeed, in some quarters of Mardi, certain pagans maintain, that no fat man can be even immortal. A dogma! truly, which should be thrown to the dogs. For fat men are the salt and savor of the earth; full of good humor, high spirits, fun, and all manner of jollity. Their breath clears the atmosphere: their exhalations air the world. Of men, they are the good measures; brimmed, heaped, pressed down, piled up, and running over. They are as ships from Teneriffe; swimming deep, full of old wine, and twenty steps down into their holds. Soft and susceptible, all round they are easy of entreaty. Wherefore, for all their rotundity, they are too often circumnavigated by hatchet-faced knaves. Ah! a fat uncle, with a fat paunch, and a fat purse, is a joy and a delight to all nephews; to philosophers, a subject of endless speculation, as to how many droves of oxen and Lake Eries of wine might have run through his great mill during the full term of his mortal career. Fat men not immortal! This very instant, old Lambert is rubbing his jolly abdomen in Paradise.


I hate stout people. Nature, I am certain, intended the whole cumbersome breed to have gone extinct with that obsolete monster, the Mammoth. They were created, clearly, to inhabit the vast barren blanks of the antediluvian world: not to encumber, with repletion, our modern cities and towns. One of them is too much for a metropolis. In London, A.D. 1825, they, (the Giants) are out of both season and place. They ought to herd together like the elephants, rhinoceroses, and hippopotami, and inhabit the deserts idle of the earth; they should seek out fitting solitudes, like the whales, and not flounder in our populous shallows. They are irksome, if not dangerous, to our thronging millions. It is neither delicate nor fair, with their disproportions, to thrust themselves as they do upon our narrow highways and byeways; to dam up our small courts, and straight alleys. They ought not to engross, as they are accustomed, our neat houses and gardens, our tables and benches, our spare beds; above all, our public mail coaches, and flying stages. Our trim elastic vehicles, like "cany waggons light," are not adapted to such preposterous freightage—our safety-coaches are not safe under such burthens—only the old double-bodied machine, long since obsolete, was competent to the transfer of such enormities. Waggon carriage, the conveyance of the bulky in the days of Fielding and Smollett, hath lamentably declined in fashion: but then are there no navigable rivers? no canals? no barges? If not for the transporting of the Blacketts and Lamberts of the earth, I wonder why water-carriage was invented?


In the London Magazine for December, 1822, appeared an amusing character sketch by Lamb entitled "The Gentle Giantess," a farcical description of the Widow Blackett, an immensely corpulent Oxford lady, who was wont to sit in her cellar in the dog days, or amid draughts which gave her friends neuralgia, and who took the air in the evenings in Magdalen Grove. In writing to Dorothy Wordsworth in 1821, when she was staying at Trinity Lodge, with her uncle, Christopher Wordsworth, one of Dr Butler's predecessors, Lamb says:


Ask anybody you meet, who is the biggest woman in Cambridge and I'll hold you a wager they'll say Mrs Smith. She broke down two benches in Trinity Gardens, one on the confines of St John's, which occasioned a litigation between the societies as to repairing it. In warm weather she retires into an ice-cellar (literally!), and dates the returns of the years from a hot Thursday some twenty years back. She sits in a room with opposite doors and windows, to let in a thorough draught, which gives her slenderer friends tooth-aches. 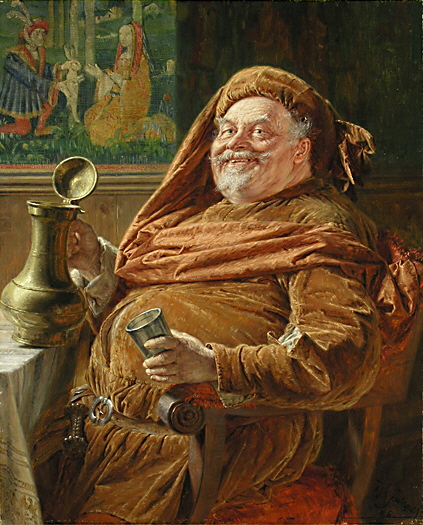 Thanks to Eric Thomson for the London Magazine and Charles Lamb material.