The Beard of Marcus Papirius


In Rome everything possible in the circumstances had now been done to prepare for the defence of the Citadel, and the grey-haired senators had gone home to await, unflinching, the coming of the enemy. It was the wish of those who had held the highest offices of state to dress for death in the outward signs of such rank as they had enjoyed or service they had rendered in the days of their former fortunes; so putting on the ceremonial robes of the dignitaries who at the Circensian Games escort the chariots of the gods, or of generals who enter the City in triumph, they took their seats, each in the courtyard of his house, on the ivory-inlaid chairs of the curule magistrates, having first — we are told — repeated after Marcus Folius the Pontifex Maximus a solemn vow to offer themselves as a sacrifice for their country and the Roman people.

Here they [the Gauls] found the humbler houses locked and barred but the mansions of the nobility open; the former they were ready enough to break into, but it was a long time before they could bring themselves to enter the latter: something akin to awe held them back at what met their gaze — those figures seated in the open courtyards, the robes and decorations august beyond reckoning, the majesty expressed in those grave, calm eyes like the majesty of gods.

They might have been statues in some holy place, and for a while the Gallic warriors stood entranced; then, on an impulse, one of them touched the beard of a certain Marcus Papirius — it was long, as was the fashion of those days — and the Roman struck him on the head with his ivory staff. That was the beginning: the barbarian flamed into anger and killed him, and the others were butchered where they sat. From that moment no mercy was shown; houses were ransacked and the empty shells set on fire.


A stirring tale which will have had its origin not in ritual but in the traditions of the gens Papiria. It may be true: generations later in a less critical situation Decius Mus was prepared to sacrifice himself. There are two facts, apart from the explicit mention of the carmen (41.3), which point to the conclusion that the senators were deliberately offering their lives by devotio: the detail that the Gaul touched Papirius' beard (41.9) and the observation that they had all held consular magistracies. The person who devoted himself had to be cum imperio (8.10.11; Cicero, de Nat. Deorum 2.10; 26.10.9 shows that in times of crisis past holders of imperium could be re-invested with it, as was the case here) and did so clasping his chin (manu subter togam ad mentum exserta). By taking hold of Papirius' beard the Gaul was interrupting the ritual gesture.

As it is told by Livy the story has lost some of its precision by improvement. There was in fact only one triumphator who is likely to have been still alive (31.4 n., L. Valerius) and the description of the doomed senators arrayed in their finery is connected with the custom of burying magistrates in their full robes of office (toga picta; cf. Vell. Pat. 2.71; Polybius 6.53.7; see Mommsen, Staatsrecht, I.441 n. 2). Moreover, L. minimized the role of devotio (it is only given as a variant, sunt qui) and instead paints a secular picture of old men stoically awaiting their end. In this L., or rather his source, must have had in mind the famous example of Cn. Octavius in 87 (Appian, B.C. 1.71). For L. the whole tale is not a religious act but an example of Roman virtus. See Wissowa, Religion, 384; H. Wagenvoort, Roman Dynamism, 31-33; Gage, Huit recherches, 128 (for a theory of an ephebic ritual); Burck 127.

Ogilvie on the identity of M. Papirius:


[I]n Plutarch (Camillus 22.6) he is reported as Παπείριος Μάνιος and in Val. Max. 3.2.7 as M. Atilius. In both authors the name is probably corrupt, for, although the suggestion that he was entitled to a triumphator's baton is mere invention, he is likely to be M. Papirius Mugillanus (4.45.5).


"Papirius insulté par un Gaulois après la prise de Rome" was the subject of the competition for the Grand Prix de Rome in 1877. The winner was Théobald Chartran (1849-1907): 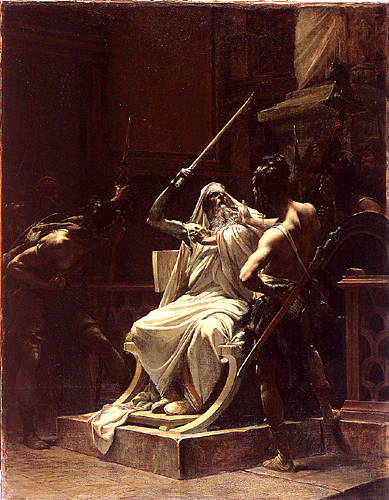 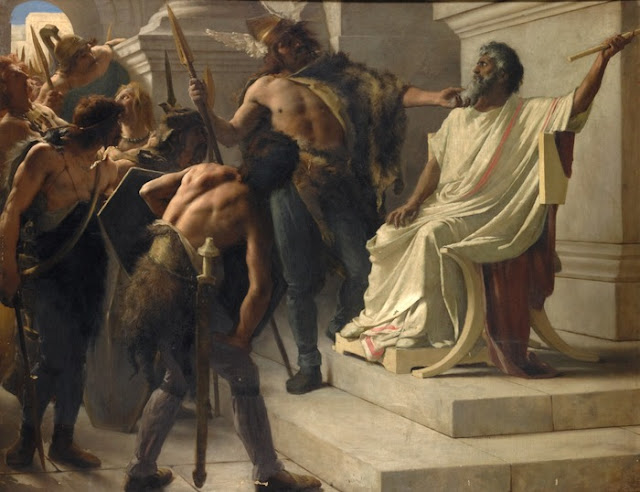 Paul Joseph Jamin (1853-1903) entered the competition but was not awarded a prize: 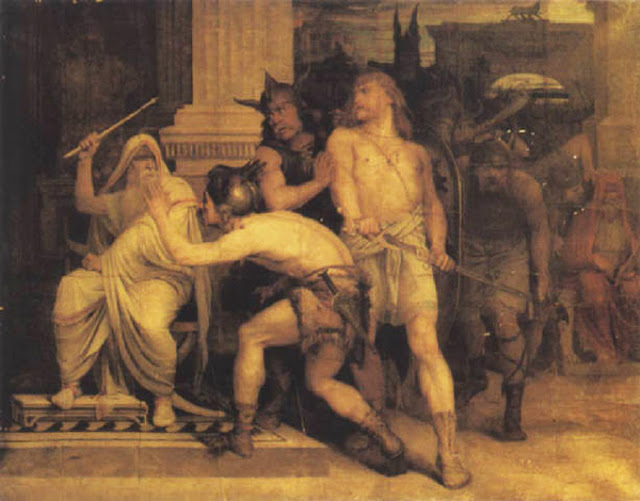 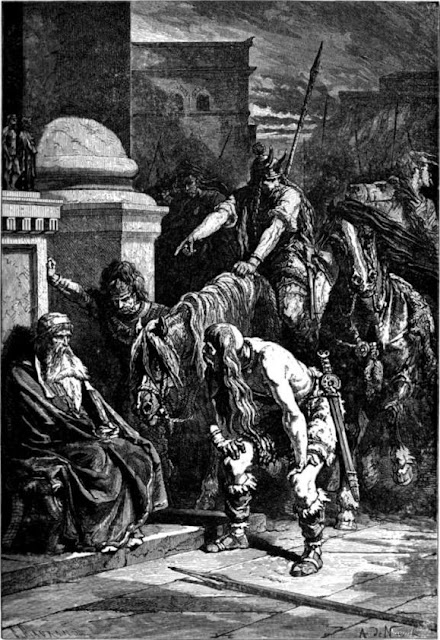 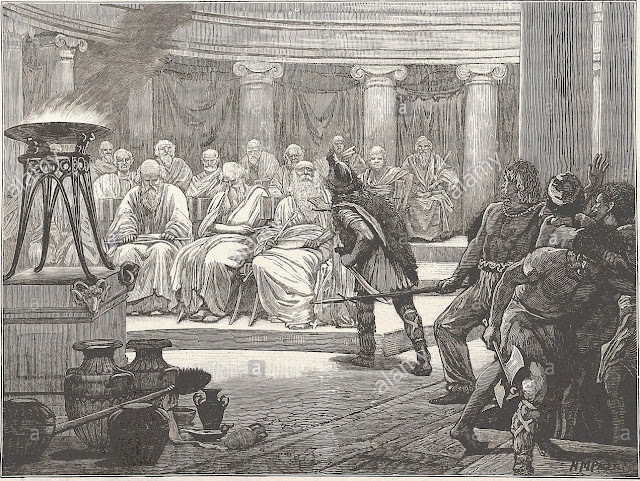